We've fallen behind a bit with our blog posts - chalk that up to finally being able to get into the fields.  Consider the following a farm report (among other things) if you are curious how things are going at the farm. 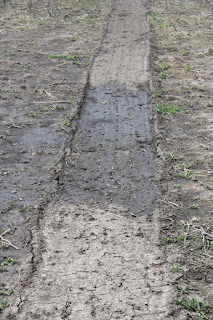 The picture above has been part of our theme for Spring this year.  The ground is too wet to do much with it.  We managed to get this strip tilled and threw in some radish seed that you can see (3 rows) coming up in this picture.  This photo comes from our best drained plot on the farm (it dries up the fastest).  The picture is from May 6.

We have spent a great deal of time in the field lately.  Especially today (Saturday).  We were able to get alot of seed in the ground.

But, this is one of the reasons we have the high tunnel. 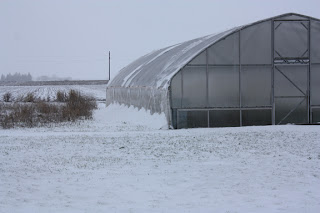 Sorry to remind you of this - but the top picture was taken May 2.  Let's just say that little hiccup in the weather didn't entirely meet the approval of the farmers.  But, the picture below was taken in the tunnel on May 6.  At this point, we still felt things were a bit behind, but they were healthy.  A current picture would be very different.  It's amazing what a couple of weeks can do. 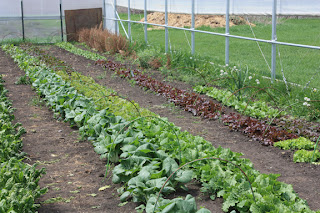 One of the plants inside the tunnel is Red Russian kale.  These are great plants to grow, and they seem to adapt well to the early season high tunnel environment. 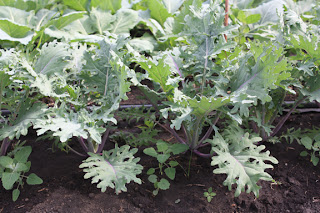 Also quite capable of adapting to the high tunnel environment is Mrranda the catten (not quite a kitten, not yet a cat).  She loves to help out when I'm working out there.  And, please note, if you see me walking around with an untied shoelace, it's because I work around a shoe lace untying critter.

Before and after.  We felt bad for the daffodils and other flowers that were covered in early May snow.  While it is true the daffodils didn't entirely like it, they still had some nice blooms for us to enjoy after the snow melted.  Also below are pictures of the Pasque flower.  It has since sent up another dozen or so blooms.  The 90+ degree weather may have just encouraged it to quit blooming. 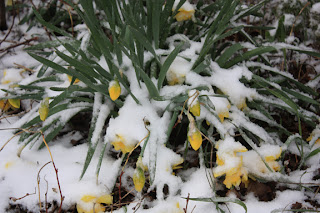 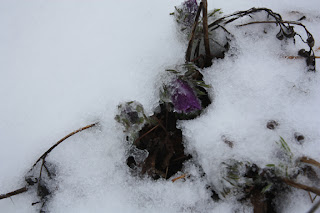 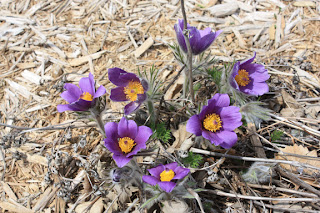 Durnik the tractor has a new tool.  It is called a flair box and it has already been extremely useful as we clean up fields and move things to the compost piles.  Since this picture, there are been two modifications to the situation.  First, the flair box has 3 new (new to it) tires.  That is good since one tire had tread peeling off of it and two tires were the wrong size.  Second, Durnik decided to stop running on Thursday.  He is currently on sick leave and we hope to have him back very early next week. 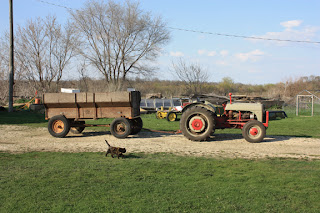 These little four tier mini-greenhouses just keep getting used every year.  this year, we put them both on carts to make it easier to move them in and out of buildings.  Up to this point, two people have had to lift them up to move them - but not too high, because you have to get under the garage door.  Now, one person can move the plants in.  This is especially good if there is an incoming storm. 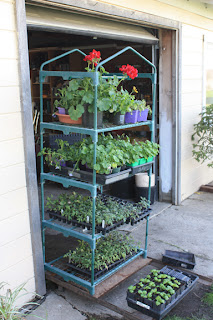 Pok choi/bok choi - an under appreciated vegetable.  They have done well in the high tunnel this Spring.  Sadly, the plants we put in the field appear to be mostly gone, so we have to start over on those.  A combination of rabbits, deer, flea beetles and weather have conspired against that planting.  I found maybe a half dozen of the 150 we planted still living this afternoon.  We had worse luck with the chard and only slightly better with kohlrabi and kale.  The lettuce was the only transplants we put in that did well.  Win some, lose some. 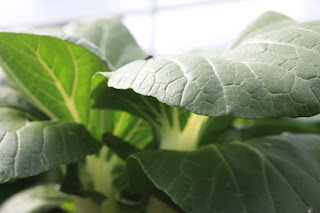 And just a reminder that those who work in the large corn and soybean fields don't really think when they are applying chemicals.  The picture you see below shows how strong the wind was on Thursday from the South.  The dust in the center of the picture is blowing rapidly away from the gravel road and into the field to its North.  Now, look just to the left of the gravel road and what do you see?  A person spraying the field. 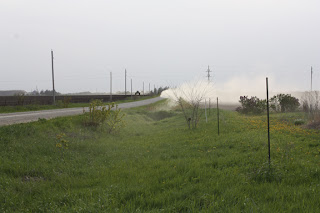 You may now ask the obvious question - "How much of that spray is going to where it belongs and how much is going to some point 200 feet (or more) to the north of the application point?"

Why does this sort of thing happen?  Well, one reason would be the fact that the guy applying this spray does not own the land.  He is contracted to spray for farmers by a coop and the coop is payed by the farmer to hire the applicator.  With no real stake in the game, what motivation does this person have to pay any attention to where the spray is actually going?
Posted by Rob Faux at 11:09 PM