T was good enough to find a YouTube cut of the Beauty and the Beast Disney animated movie with the song about Gaston that includes the wonderful lines:

You know, Lafou, I've been thinking.
A dangerous pastime.
I know...

Here it is - take this link. 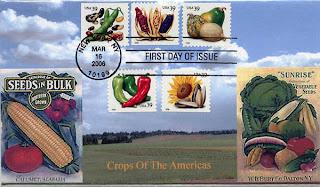 And, speaking of pastimes - here's another that sometimes gets my attention. I'm a postal historian/philatelist and I'm slowly putting some things together that match our farming endeavors with the hobby. This one is a bit contrived - but it's pretty. The only thing I have to say about it is to put a bit of a DIG on the "Crops of the Americas" label. The truth - most of the pictured items were grown by Native Americans. In fact, squash, dry beans and corn were known as the 'three sisters' and are a wonderful example of early companion planting. It was also not uncommon to include sunflowers in the companion mix. However, the implication is that these are present day crops of the Americas - either not true in the forms shown here or certainly not on the scale implied here. At least they didn't do 'commodity crops of the Americas!"

We have seen a 100+ acre field of sunflowers and I will say that it was something to behold! 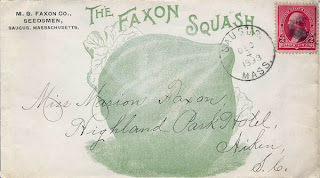 Then there's this 1890's advertising cover. It more than likely contained a personal correspondence since the addressee has the last name, Faxon - and it's addressed to a Hotel - indicating likely travel. If anyone knows if the Faxon squash strain still exists somewhere in the world, let me know. I don' t necessarily want to grow it - I just want to know - because I can't help myself.
Posted by Rob Faux at 9:14 AM