And now, for something completely different...

Sometimes, we see things and we just can't help ourselves.  We receive a few magazines related to horticulture (I wonder why that would be?).  And, those magazines have advertisements.  And, many of those advertisements are for products we won't use.  And... well, here's a picture that is supposed to make us want to use an insecticide. 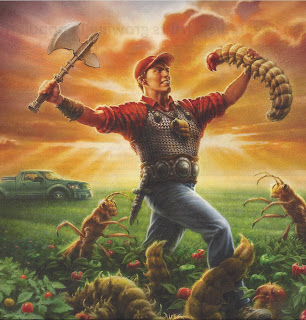 Possible captions:
a. Caterpillar, it's what's for dinner (alas for Copland, a fine piece of music forever scarred)
b. Hey Rocky, watch me cut off my arm with this stylized hatchet!
c.  I have something to tell you, I'm not left appendaged either!
d. Look, I've got a new cell phone holder!  It makes me want to.... sing!

On another front, this picture is from early January.  There is a snowmobile trail that goes around our property.  The signs, set out by the snowmobiling club, indicates the trail crosses the road and into the ditch on the other side, before turning South and away from our farm. 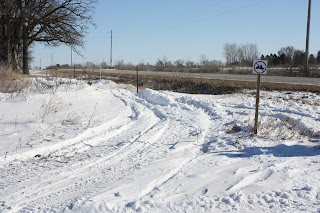 Clearly, there needs to be some help identifying what the red circle with a slash through it might mean.  Yes, we spent time trying to pound in several more stakes and signs soon after noticing this problem.  Why are we so worried about this?  What you don't see are smaller lilac bushes at the left and a culvert on the right.  We really would prefer the lilacs not be pruned in this fashion.  And...we'd also prefer not to have frantic individuals at our door if someone hit the culvert with their snowmobile.  The actions of the few will likely result in reduced options for the many.

Then, there is this picture.  I took it when I noticed (in December) how shiny Chumley's bumper was.  Mrranda noticed I was taking a picture and wanted to watch.  So, you can see the cat looking up (bottom left). 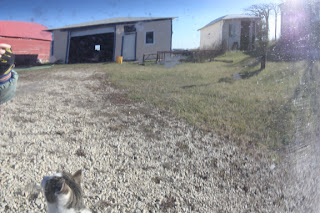 I missed framing it by "this much."  There's a hand holding a camera at the left.  Don't worry, I'm sure Chumley will acquire his share of farm dirt over the growing season.

Then, there was Bullwinkle the potato... 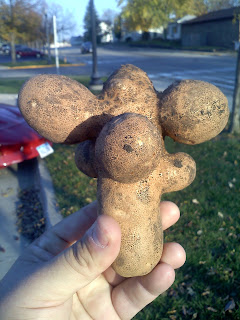 Hey Rocky!  Watch me pull a potato out of the ground!  It seemed like the Rio Grande russets were more prone to odd shapes this year than any of the other varieties we grew.  Happily, it was not all of the crop, so when we ran across something like this, it was amusing, rather than annoying.

If you recall the growing season for 2013, you'll remember it was dry.  But, do you also remember how warm it got REALLY early?  All of the trees budded out early and fruit trees in Iowa went to town, putting blooms on absurdly early.  Then, of course, we had freezes that took out most of the fruit crops in the state. 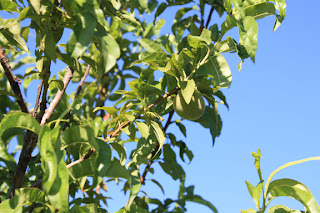 We're not big fruit growers.  We just have 6-8 young apple trees, a couple of young plums, pears and ...one peach tree.  The only tree to give us any fruit in 2013?  The peach.  Look in the center of the picture and a bit to the left.  There it is.  The only fruit we got from our trees last season.  Yes, it was tasty.  Yes, I shared.

As veg farmers, we don't get quite as excited for Spring as we used to.  Don't get us wrong.  Both of us still felt the thrill of seeing some robins down by Knoxville last weekend.  But, Spring means the beginning of the season that doesn't let us slow down.  It's fine once it starts, but sometimes a person doesn't want to start.  I'm sure everyone knows that feeling. 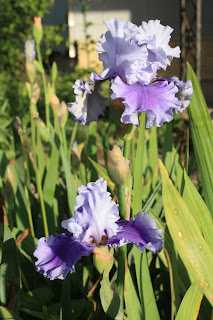 So, when all else fails.  We remember iris flowers.  Now, there's a good reason to look forward to Spring.  The flower above is known as Spouting Horn.  Hoping to see it again this Spring.

Speaking of "Spouting Horn,"  here it is - from the coast of Oregon.  No, we don't get to go back there this March, but we sure did enjoy our trip there last March. 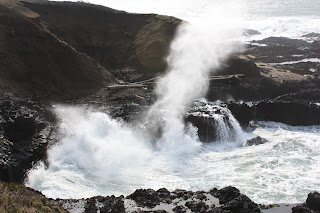 Spring also makes us think of wind....  speaking of which, we are slated to get a bit of that with some snow tomorrow.  Now that I've visited Oregon, I can look at the picture below and get some perspective. 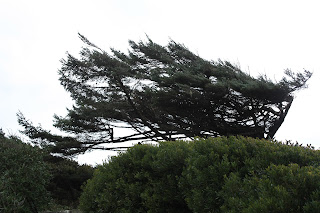 When I'm tempted to complain about the wind on the farm, I'll look at this.  Our trees don't look like that.  Maybe the wind here isn't so bad after all.
Posted by Rob Faux at 9:33 PM