We actually got out and took some pictures in late March of the farm.  We need to do that again, but it can be difficult to be motivated to take a bunch of pictures when it is cold and raining.  Maybe Saturday? 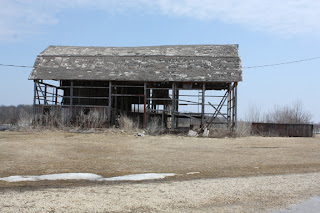 The barn looking its most forlorn.  Maybe someday we will find a way to get it taken down?  If I'd been thinking, I might have played with the angles and light - but I was just shooting pictures to document life at the farm. 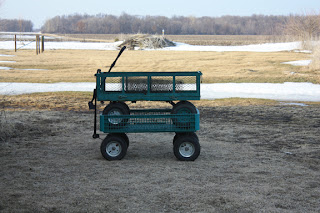 Late Fall is all about trying to compress everything into the shelter we have available on the farm.  This was a three high pile of carts, but I didn't think to take a picture of it until we'd taken one down to be used.  Also, we never quite appreciate our air compressor until we find ourselves trying to fill every tire of every cart, implement, trailer, etc there is on the farm. 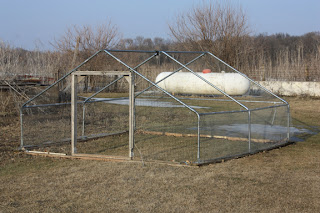 Ah...the Duck N Cover looks so sad without its cover on it.  But, this is another Winter thing.  As it stands, this is going to be converted to a plant shelter in the very near future.  that means we have to build new bird shelter(s).  The motivation is, in part, the degradation of the canvas cover for this shelter.  That, and the bottom frame is beginning to rot out.  It may not handle another year of being moved about as it stands anyway. 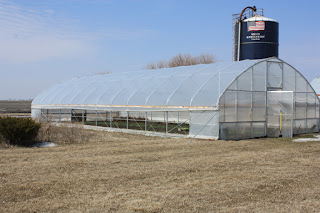 The high tunnel was opened in late March for the first time this year.  It was actually the first time we could roll up the sides since there was a good deal of snow and ice covering the sides. 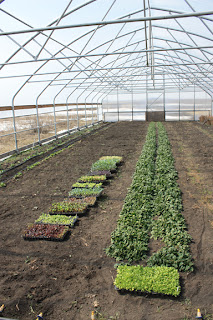 And, in the middle we have the spinach that overwintered fairly well.  Trays of things to be transplanted are at the left.  Everything else we tried to overwinter did not fair so well this year.  Some of this has to do with the way last year ended for us.  Some of it had to do with the weather.  It's ok.  We'll get another picture out there soon so you can see the progress. 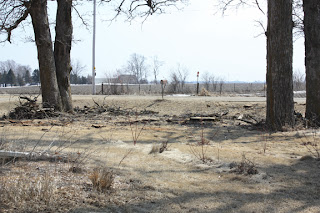 We lost an oak tree last Spring and we decided this poor sentinel was too close to the house (and other trees) to let it stand.  Just a little cleanup left to do. 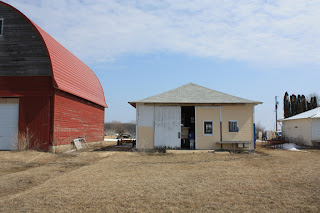 You know, that truck barn isn't looking so bad after last year's work.  A little more painting.  We're wondering if we'll get to replacing the door here or not.  Probably not, so we better paint it too. 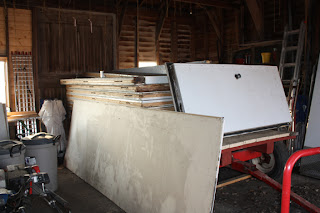 And, here is a project that needs to happen this Spring.  We were able to acquire the walls from a walk-in cooler in a Hy-Vee that was remodeling.

Upside #1 - this stuff can get expensive and these are in reasonably good condition.
Upside #2 - it only cost a little time and transportation money to get it.
Downside #1 - The rafters in this building are about 6 inches too short to accommodate these walls.  This could get interesting
Downside #2 - We only acquired ONE corner.... hmmmm.

All in all, this represents some serious work, but the benefits for us long-term are significant.  We'll share that with you some day - especially if you ask nice!
Posted by Rob Faux at 3:28 PM