Winter, We Hardly Knew Ye (Careful What You Wish For)

I started to type the title of this blog post and realized that we are still well within range for some very Wintry weather.  There is no denying that this El Nino year has resulted in an abbreviated (thus far) snow and cold season.  But, before you get too excited about this let me remind you of a few things.

Is It Spring Already?
If things stay significantly warmer, some of our annual crops - including fruit trees - will start to bud out.  This is actually a VERY BAD thing if you want a good crop.  It is highly likely we will have freezing weather yet this month and the next.  And, I don't mean something like an hour or two at 30 or 31 degrees.  I mean, below freezing and staying there for days.  If these things get started now, they're likely going to have bud freeze-off and we won't have some of those crops this coming year.  So, while I'm just like anyone else - I enjoy mild temperatures and weather because I really LIKE being out in it - I also consider the best interests of some of the plants we care for.  Farmers... can't make them happy with any kind of weather I guess.

I've also started hearing the standard comments along the lines of "you must be anxious to get things planted" and "I am sure you're already putting things in."  Well, yes and no.  Frankly, I'm not as pleased about the approach of Spring as maybe I once was.  Spring is simply an indicator to me that I must work harder and continuously to do the things I do.  While I certainly do plenty in the Winter, there is no denying that it is a more relaxed pace than the growing season.  Spring is my equivalent to the end of August for those who still run on a school calendar.  On the other hand, I do still like growing things and I do still like Spring.  I just wish I'd gotten more of the things done that I said I'd do during my "off-season."  And the time for that is running out - just like it does every year.

Great Minds
While I normally am the one to grab the camera and try to catch things around the farm to share with people on our blog, Tammy will sometimes get a wild hair and do the same.  We didn't communicate about the pictures you see below and they came on two different mornings.  But, we did select similar subject material.  Can you guess which of us took each picture? 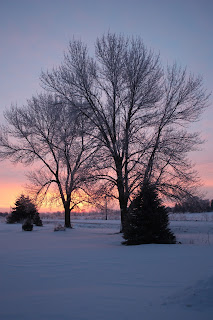 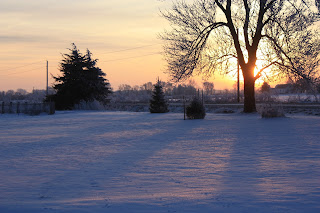 The Burning Bush is Frozen?
We have a nice little Burning Bush just to the southeast of our house.  I managed to grab a chance to take a picture of it when it was covered in hoarfrost.  I couldn't really capture how cool it looked, but I could not pass up the chance for the wordplay. (actually, when have I passed up a chance for wordplay?) 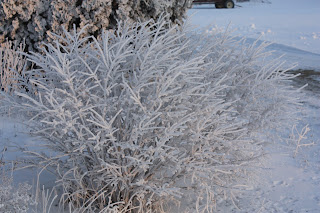 Bad Timing
One of our trials this past year was to get some clover growing in the paths between the cucumber rows.  I apparently missed the time frame for getting the clover established so it would do us any good while the cucumbers were growing.  But, guess what I found in early December?  Why yes.... a nice, 200 foot long clover patch in between where 2 cucumber rows had been.
Part of the idea here was to help reduce weeds during the harvest period for cucumbers.  Clearly, I failed in that endeavor.  Another part was to help keep the cucumbers cleaner on rainy day harvests.  Again, we didn't see that either.
But, one of the principle ideas of cover crops is to keep soil covered to prevent erosion and to promote healthy microbiology in the soil itself.  Clover has an added benefit that it fixes nitrogen into the soil as well.  So, I may have missed my timing on this one, but I still get some benefits.  I'll take it.  And, no, I didn't notice any four-leaf clovers in this batch.  But, there was one in the path just to the West of these.
Posted by Rob Faux at 4:30 AM