It has been too long since we've actually posted here, so we're going for some "low-hanging" fruit and posting some picture before and afters for you to peruse.  Please believe me when I say there are a number of posts in the brain or in the writing pipeline.  but, finding the time to do them has been problematic.

Cucumbers!
We just went through the cucumber peak over the last couple of weeks and, sadly, they are already in decline.  But, it's always fun while it lasts.

It does not take long for cucumber to cover an area once they decide to sprawl and this year was no exception.  For those who need orientation, there are peas on the fences to the left.  They are finished producing (in both pictures) and since the last picture, those fences have been taken down.  The plants to the right are pole beans.  As you can see, we added fencing there in between the two pictures (about 10 days between the two pictures).

There is usually a need to get in a weeding just as the melons start to sprawl.  We hit that field this year during one of the warmest days of the season.

Remember, if you need to see a bigger version of these pictures, you can double click on them and a window will open with the larger version.  Since this time, the vines have sprawled and the flowers in the companion plants (borage, zinnia, phacelia) are now open.  And, of course, it looks like we should weed again.  What else is new?

Broccoli!
This field is actually broccoli, cauliflower, romanesco and onions.  But, who's counting?

It may look like the rows are very short in the second picture, but please believe me that it is a perspective thing and the area with no plants is much shorter than the area with plants.  This has been a tough field this year, but we're fighting it with some success. 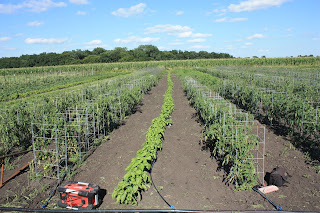 There always seems to be a period of time in the Summer where EVERY field feels like it is getting away from you.  We put in a great deal of effort to try to clean things up and had some good results.  But, once again, it is mid-August and we're looking at areas that need attention again.

It's a never ending cycle - so I'd better to get some weeding done now.

Email ThisBlogThis!Share to TwitterShare to FacebookShare to Pinterest
Labels: oui we weed