We held our annual Summer Festival at the farm on August 27 and continued with our three (or four?) year old tradition of including a picture scavenger hunt for those that attended.  It's a low-key hunt that encourages people to check out the farm and see if they can find some of the things on the scavenger hunt sheets.  Young and old alike seem to enjoy it at least as much as I do when I create it.

Being a typical introvert, I take time to process my interactions and events from a large gathering of people more than perhaps an extrovert might.  This time around, the scavenger hunt has ended up being my theme - whether I intended it to be or not.
The Elephant in the Room
One of the easiest photos, in my opinion, was the photo of the Harvestore (silo) building.  Imagine my surprise when two people who spend/spent a fair amount of time on the farm didn't get this one.  After all, the Harvestore is big and tall.  It's a blue color that doesn't appear in nature.  You can see it from practically everywhere on the farm.  It was my thought that everyone would see the Harvestore and walk over to it to see these particular bolts/nuts.  And, I am sure many people did just that.

This is a great reminder to me that not everyone sees what is obvious to me.  It doesn't necessarily mean that I am any more insightful or observant than others.  It just means that each of us sees, hears, feels with different filters and priorities.  It's a reminder to me that I should be patient when others do not immediately understand or find the same importance in things that I do.  It's also a reminder that I should hope for the same patience from others when I am apparently missing the elephant in the room.  Even if it is sitting in my lap at the time.

Differing Perspectives
This may be my favorite picture of the whole group I took for the scavenger hunt.  We have some mature burr oak trees in front of the house.  (just remember, if  it's not Burr Oak, don't fix it...)

Tammy and I both have an affinity for burr oaks, for various reasons, so it is nice to have them on the farm. At least two of these trees have been hit by lightning since we've been here.  One of them is slowly declining.  But, the one in the picture seems fine despite the split in the bark that runs 30 to 40 feet up the trunk from the ground.  The scarred area is on the right of this picture and the normal bark (covered with moss) is on the left.

This picture reminded me that I am given the gift of seeing the farm through other people's eyes during the festival.  One person exclaimed, "What a beautiful place you have here!"

My first reaction to this?

"What?  Can't you see the weeds in that field?  And, those bushes over there aren't doing well.  I really don't know what to do about that.  That fence needs to be mended.  Ooops.  I forgot to clean that pile up before you all got here.  I told myself we wouldn't have another festival where the back door entrance wasn't in such poor repair.  I wish I had time to finish painting that building... etc"

And... I wish that tree hadn't been struck by lightning.

Yet, you look at it closely and you find that it's actually quite beautiful just the way it is.  Huh.


How Is Your Growing Season Going?
I am getting better at answering this question than I used to be.  But, it still takes a moment to warm up to it.  So, I apologize to those who asked if they didn't get an all-encompassing positive feeling after my answer.

When you have a diversified farm such as the one we manage and maintain, there is NEVER going to be a simple answer to this question.  I can't exactly say it's been a poor year, because that is inaccurate and incomplete for an answer.  If I tell you that it has been a great year, that too would be incorrect.  Even telling you it has been an average year doesn't do it.  It's just like showing you the picture above and asking you to tell me what the rest of the word is (you all know it is "Practical" because of the caption - but that's cheating!).

Because we spend more time on the farm looking at things that are going wrong and trying to figure out how to address them, negatives are often the first thing that pops up in my mind when I'm asked the question.  I get tempted to tell people that it has been a disappointing year.  But, then I remember that our CSA shares have had contents that rival our best years for variety and quality.  I think about how good the lettuce has done this year and I realize that the snow peas ran at a reasonable average yield this year for us (rather than the bumper crop of 2015).

In the end, this question becomes the same thing for me as "How are you doing?"  My answer for both has more to do with my personal feelings at the moment and less to do with what might actually be happening.  So, if you ask me this question - and you really want an answer - tell me so.  I'll give you the longer (and more accurate) answer.  I promise I won't take too long.  I can get to the point quickly if I need to.  But, if you want to know how I'm doing, ask this question and tell me you want a short answer. 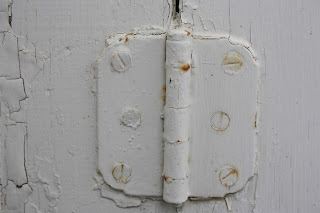 Connections to Another Land
We were honored by the visit of Benjamin Kusi of Ghana at our farm during the festival.  Benjamin is the in-country staff directory for Self-Help International.  Our thanks to Jeff and Susan Cornforth for being willing to make this connection. I realized that it might have been nice to have had more time to talk to Benjamin, but my duties as a host precluded that to some level.  I am hopeful that I will be able to have more conversations with him in the future.

Nonetheless, I learned some things during our quick tour of the farm and the conversation that we had during that tour.  Oddly, some of my learning came in the form of self-introspection.  Some of the questions Benjamin asked me caused me to do some quick re-analysis of what I really thought.  I suppose some of the reason for this is because I very much wanted to give him my best and most accurate answers based on what I think I know at this time in my life.  After all, he has come a long way to see some farming operations in Iowa.  I wanted to make it worth his while.

But, the questions were also formulated in a way that made me want to consider them more carefully.  It was clear that these were not 'throw-away' questions to make conversation or to get me started talking.  They were presented in a way that wanted answers.  Benjamin was also kind enough to answer some of my questions with respect to the state of agriculture in Ghana.

Celebrating the Summer Fest
Our 2016 Summer Festival appears to have been a success.  Tammy prepared the turkey to perfection and everyone enjoyed turkey sandwiches with heirloom tomatoes and lettuce (all GFF raised!).  There was a wide variety of potluck items that were happily consumed by all who attended.  The Buskers, once again, provided excellent music and many people enjoyed just roaming the farm and getting a feel for what we do here.  Sidewalk chalk drawing appeared to get some imagination going and the hayrack became an impromptu dance stage.  A few overly ripe cucumbers became mini-vehicles - at least for a few moments.  Inspector (the kitten) made several new friends and the Sandman watched from afar.  Of course, the Sandman sauntered up to me once the last car left.

A few things didn't happen the way we planned, but that's the way our farm rolls.  Perfection is boring?  Or perhaps, it would be more accurate to say that things that always go according to plan are boring.  Perhaps, perfection is the acceptance of what actually happens.  Flaws and all.