Every year, we put out a top veggie variety list and give some reasons why that variety is in our top 15 (previously top 10).  Sometimes we are asked for more detail on these varieties, so we thought we'd put some short blog posts out during the Winter months.  Eventually, these details will go onto our website as an update to what is found there. 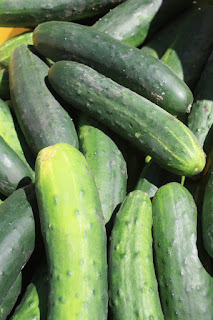 Marketmore is an excellent market gardener's slicing cucumber.  Marketmore has been a part of our operation longer than any other cucumber and we don't foresee removing it in the future.  During excellent growing years, you could be overwhelmed by the production levels. Large fruit at 8-10 inches (and sometimes larger) are still excellent quality.  Our average harvest size is around 3/4 pound and we expect no less than 4 marketable fruit per row foot, usually get much more (9 to 12).  We realize our plants produce more prolifically than we report, but we usually fall behind on keeping cukes picked as other veggies clamor for our attention.

A late May planting typically takes 59 days to reach the peak harvest with first fruits trickling in as early as two weeks prior.  Pushing the planting back to early June shortens days to peak harvest to 51 days, with first fruits often hard to distinguish from the peak harvest.  We like to grow two (sometimes three) successions of cucumbers and still find ourselves getting caught planting the later succession too close to the first succession.  The net result is that we have far too many cucumbers at one point in time for our business model.

We try to wait to pick fruit until they have "filled out." You might notice that many cucumbers are a bit more ridged when they are smaller. If you have a Marketmore fruit that has deeper ridging and is on the smaller side, you should let them go a bit more if you are looking to eat it fresh. Their flavor is better after that point.  On the other hand, we have had good reports from those who like to pickle Marketmore 76 when they are smaller.

In 2012, we opted to plant one succession as transplants and the other as a direct seeding. The results of this trial alone illustrated for us the benefits of starting the plants in trays and then transplanting it. Production in the direct seed rows was less than half that of the transplant rows. This does not indicate lower production from surviving plants, but it does reflect a smaller number of plants due to early seedling death (cucumber beetle girdling typically).  At this point, we transplant all of our cucumbers.

There are three or more releases of Marketmore that we have seen and we have found Marketmore 76 to be reliable, disease resistent and productive.  This variety outperformed Marketmore 98 on our farm several years ago and we don't see 98 offered in any of the seed catalogs we receive at this time.   Essentially, that tells us that we are not the only ones who favor Marketmore 76.  We find the strain that High Mowing maintains shows consistently superior qualities over seed we have purchased from other suppliers.
Posted by Rob Faux at 4:30 AM