We take pictures with the digital camera during the farming season, but they don't always get the appreciation they deserve until the end of the year.  Or, perhaps the NEXT year.  Or, maybe the one AFTER that.  We're going to follow our 'Picture This' format and let the pictures help me figure out what to say this time. 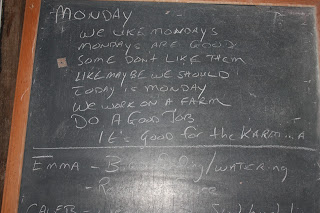 I include this picture in our blog just to show everyone that we do our best to maintain a sense of humor during the growing season.  It also shows that we use a chalkboard (and a chalk door) to communicate with our workers during the Summer.  The good news for all of you?  It's not Monday.  Unless you wait until next Monday to read this blog post.  Then it is.

This picture may have made an earlier appearance in our blog, but it is cool enough to include again.  Freezing fog find a way to highlight things that we might normally miss - like spider webs in the corner of a door frame.  Apologies to those of you who really have a problem with spiders - but you can just think of it as silly string.

The sun comes up so darned late right now that it isn't actually that big of a deal to see it.  Come May and June, that's a different matter.  Neither of us are actually morning people, but we do tend to get up earlier during the growing season so we can try to get everything done that needs doing.  So, yes, we do see sunrises other times of year.  But, that's part of the reason why sunrise in December is mildly disconcerting.  You get up, have some breakfast, do some chores, do a few other things and then you look East and see the sunrise.

Wait.  Wait a minute here.  Isn't that how my day is supposed to START?  Aren't we getting ready for lunch now?

Odd things like drilling holes into brand new containers upon their arrival.  We ordered these bussing trays from a restaurant supplier so we could start lettuce and onions in them.  Of course, we have to have drainage holes so the water doesn't build up in them, right?  There is a still a part of me that says this is wrong - even if it is right.

The old thing about stomping on grapes to produce wine stuck with me as I climbed into a flair box to stomp down sunflower and okra stalks we were picking up this past Spring (early Spring).  I seem to recall being a bit sore after that day.  So, you could say my efforts only resulted in whine.

Inspector was an odd little kitten.  This picture should probably get set up for a caption (or cat-tion) contest.  What do you all think?
This past year I had a person who looked at some of our June produce and was incredulous.
"You didn't grow this?!?"
"Yes ma'am, I did grow this."
"How could you have?  You didn't grow this!"
"I'm sorry, but what do you mean?  I assure you, we grew this on our farm."
"But, it looks so good!"
"Um..... thank you?"

I'm still not sure what to think of that exchange.  But, they did buy something.

If I could encourage the growth of more goldenrod on our farm I would (and I will as I figure out more ways to do so).  They bloom at a time when so many other things are fading.  The pollinators love them.  They don't, contrary to myth, cause allergy problems because the pollen is pretty heavy, so it doesn't become as airborn as things like giant ragweed.  I'm not sure what type of solidago this one is, but it was growing happily near one of our paths this Fall.
I can still remember how good it felt to get that plastic put on our older high tunnel (Eden).  But, what made it feel even better was the support we received to get it done.

We've been trying to add some shelter to our poultry pastures in the Northwest over the past few years.  And, we both like apricots, so some of the shelter has come in the form of fruit trees.  In the foreground, you see one of our apricots and another apricot is immediately behind it.  The maple tree is to the right and back.  What you don't see is the weeping willow that is now called Crazy Ol' Maurice.  I'm sure Maurice will show up in later blogs.

We spent more time yesterday continuing to re-organize after the Fall harvest blitz.  Things tend to get moved alot when the potatoes, squash, root crops and all sorts of other things are pulled in before it gets too cold in the fields.  Essentially, we harvest and we haul it back to the truck barn and find anyplace to put it so we can go harvest more and haul more.  Once it gets too dark to harvest, we do our best to put things away.  Except, of course, there is often not enough "away" space to put it all.  The result is that we make lots more "away" space to put everything.  We're working on it.  It gets better every year.
Posted by Rob Faux at 11:39 AM

Email ThisBlogThis!Share to TwitterShare to FacebookShare to Pinterest
Labels: general strangeness and minions, Picture This