Brassicae and Allia Together Again

We try to do a fair amount with intercropping on our farm and we're always tweaking how we attempt to make it happen.  This year, we stuck with the general principles of the last few years when it came to the brassicae (broccoli, cauliflower, etc) and the allia (onions, garlic, etc).  Instead, we went with a couple of tweaks.

Even in a decent year, it often seems like we ride the edge of disaster.  Case in point:
Some people would say that we had already reached the "uh oh" stage, but I think the picture actually overstates the case this time around.  The weeds were not all that dense, but they certainly had some real bulk to them.  An earlier run with the Williams Toolbar with the flextines made onion weeding do-able rather than a nightmare.  Simply put, the picture you see above is what happens when the next field on the cultivation list isn't taken care of before a series of rains that make the field too wet to work.  It really did not look all that bad prior to the rains - honest!

Tammy and I spent a good portion of our July 4th celebrating our ability to eradicate weeds.  If you look at the picture above, you'll notice all of the rows at the left are pretty clean and the rows directly in front of us are well on the way.  The sunny, warmer weather made it easy to just let the weeds dry out in place.  Let's just say they didn't appreciate having their roots exposed.
The crew rejoined us on the 5th and we got the in row work done on some onions and broccoli.  What you don't see clearly here is the intercropping of marigolds in row with the broccoli.  We've tried some herbs in the past with some success, but we're both enjoying the marigolds more. 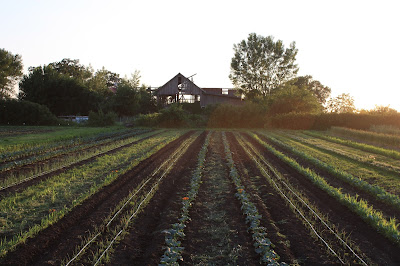 A rewarding end of the day sight for me was this picture as I brought in tools.  This blog post was written on July 8 (even though it will not appear until July 17).  It's only three days later and the field exhibits significant growth for all of the crops.

Broccoli and onions were actually part of our SARE funded study from a few years ago along with our bean/potato research.  If you are interested, you could view this:

A quick summary could be this: we found planting onions and brassicae in the same bed to be an issue for the onions.  Since that time, we've found that adjacent bends help with cabbage looper and cabbage worm.  We are now tinkering with three versus four rows of onions per bed and with the frequency of the in-row companion (marigold, for example) with the brassicae.  In the next few weeks, we will undersew some cover crops in select rows and see what that does for us.

And now, you know more about some of our crops than you ever wanted to!
Posted by Rob Faux at 4:30 AM