Rats in Your Room

Our story begins with a batch of turklets in their room.  They had nice clean straw and lots of area to run around.  They jumped and hopped when a moth made the bad decision to fly through.  We saw the moth for a while and then it wasn't there.  We're not sure if the moth managed to leave, land somewhere safe or if it met a "Beak of Doom." 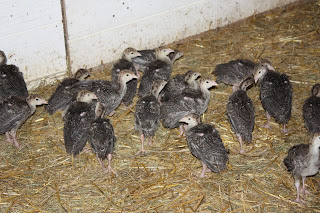 The turklets were healthy.  They were curious about everything.  They ate well.  They stayed hydrated and got plenty of exercise.  Until, one morning.

We'd seen this before and figured rats had decided to expand their diet from stealing feed from the turklets to the turklets themselves.  Not good. 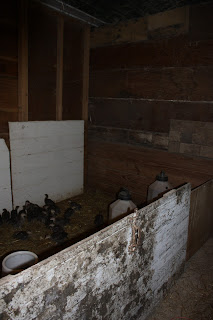 So, we moved the turklets from their room to the brooder room, which is more secure.  There are fewer entry points and we got the birds away from where the rats had established that turklets were edible. 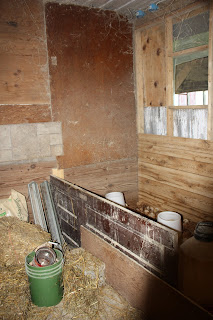 We set out to rid ourselves of the rats in the turkey room and ended up catching one in a rather non-conventional way.  Apparently, the one picture above was used to going THROUGH the chicken wire about half-way up the turkey room wall.  Also apparently, adding turkey to the diet went straight to the rat's hips.

Tammy went to check the room the morning after we moved the turklets and found this rat stuck and unable to get out of its predicament.  Queen Boss Tammy's wrath resulted in the smiting of said rat and it is no more.

If you are a farmer with animals, you have to know there will be rats.  If you have livestock, you have to accept you will lose some of them.  It doesn't make you happy, but there you are.  But, it is even rarer to be given a gem like this after what could be termed a 'bad situation.'

The turklets are currently 'safe' and healthy.  The nuggets are moved and out on pasture.  And, the rat gave us an opportunity to laugh and have a little fun - at its expense.  We put out some Facebook posts asking people to give us song titles that would fit the picture above.  Here are our favorites that were submitted or mentioned:


Number 9: Vigilantes of Love "It Could Be Alot Worse"

Quite literally - at that.

Number 2: Kerry Livgren "Hindsight"
Ahhhh!  A title that works on SO many levels.  You just have to like it.

Number 1: NRBQ "Rats in My Room"
There was just no question about this one.


And a bonus: Princess Bride and the ROUS