It is no secret to those that pay any attention to what we do that there are things that we struggle with every single growing season.  And yet, if you think about what we share in our blog, in our emails and on social media, you'll notice we try not to say too much about it.

If you follow our farm or other farms like ours on social media, it isn't all that often that you see any of us reporting daily struggles.  Instead, you'll see a nice picture of a garlic harvest.  Or a field that was weedy, but has now been weeded.  Or smiling workers achieving something of worth on the farm.  We all figure you don't want or need to hear about day-in/day-out struggles - so we tend not to share them.

The exceptions to this rule:
1. A major disaster that needs to be shared in order to garner needed support
2. An issue that we can put a humorous twist on so it doesn't really seem like a negative after all
3. We feel like there is an worthwhile educational component, which often makes it all seem a little less personal and therefore less painful
or
4. Anything to do with the weather.

If you farm, the weather is always not quite right no matter what happens.  Too wet, too hot, too dry, too windy, too calm, too cold, too much like a roller coaster, too many entrenched weather systems that stick us in one weather pattern for weeks, etc etc.  In other words, weather is simply too much sometimes.

We catch ourselves getting a bit whiny about the weather and we try to stay away from complaining about it too much.  But, there are times when it is warranted.  For example, it seemed to us that we have had more severe wind events in our area than most seasons - and after looking at some of our historical records, that seems to be true.  One of this year's events was the dust storm preceding the actual storm in May that scrubbed Rob raw as he tried to get inside and failed to do so in time.

Since then, the weather has shifted a bit from the excessive winds, though we have gotten plenty of poufffssss over the past couple months.  Instead, it is more of excessive rain rates that cause our poor weather station to tell us it is "raining cats and dogs."
And, while it wasn't exactly a heavy downpour event, we even ended up rescheduling a CSA delivery because we weren't going to try to pick in the rain and lightning.  That's not something we've done many times since our farm share programs inception in 2005.  But, we had scheduled in some flexibility this time around and decided to take advantage of it.  It ended up working for the best for us AND for our customers, so we'll take it.
Tammy and I actually did a rare thing and scheduled a quick trip away from the farm to see family and participate in a postal history related event in Minnesota.  We had workers we could trust to handle the farm and we just needed a break.

So - what happens?  It rains.  And it rains.  And it rains.  Sumner (to our East) is still trying to clean up from the flooding.  And as a side note, this is actually the second rain event this Summer that flooded Sumner's streets.  But, this one really did serious damage.   It was just ridiculous amounts of rain.
And this is how the two of us can start to feel guilty in a hurry.  We leave and take a break from the farm during the growing season, which really shouldn't be allowed.  We're already feeling a bit guilty - even if everyone out there tells us we earned a break and it is ok that we took one.  But, when you leave the farm and things get difficult due to rain and heat, you can't help but feel guilty having left workers to deal with the problems when it should be you that has to deal.
Caleb and Jocelyn did a fine job handling everything and they kept us up to date with what was going on.  Caleb had to fix a high tunnel rollup bar that broke and they had to be creative with tasks.  You see, Rob gave them a list of things to do "if it didn't rain" and "if it did rain."  He failed to give them one "if the heavens opened up and dumped never-ending buckets of water onto the farm."

We returned from our break and the farm was still there.  Jocelyn and Caleb are both fine.  There are still some gummy spots in the fields, but it is drying out enough to do work most places.  We lost our productive green bean rows in Eden (older high tunnel) due to flooding followed by excessive heat.  A few other plants in that building didn't take the event all that well either.  Field peppers didn't care for the wet feet and are set back as well.  But, generally speaking, we'll be fine.  We just won't have bumper crops of everything like we dreamed we would in January.  (Remember Farmer Delusional Syndrome?) 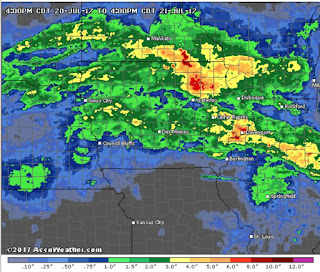 And here's where it all gets really nuts.  The Western and Southern parts of Iowa are very dry and many areas are now in drought conditions.  Meanwhile, we're sitting at 8.75" of rain for July and points not too far away got more than that in a single rain event.  If you go just a little ways south and west of us (Waverly, Cedar Falls, Waterloo), the rain amounts weren't all that high.

Tammy and I actually remember a time when we were less tied to the weather.  Sure, if there was tremendously extreme weather, we took note.  But, if it rained three days straight, we read books (for example) and didn't really worry too much about it unless our basement flooded or some such thing.  Now, a little bit of rain, or no rain, can alter much of what we plan to do on a day to day basis.