Life on the farm always has its two faces.  One faces the light and the other is always turned away from it.  You may take that any way you want, of course.  But, I have been seeing the pattern from month to month this year as I've worked to create interesting monthly newsletters.  Each month has its positive, hopeful side.  And, of course, each has the reverse of the coin.  September was the month of despair and hope.  October is the month of  (to quote Grover) near and far....

I suppose you could say we're conflicted about October.

Conflicted or not, here we are!  Enjoy our October newsletter. 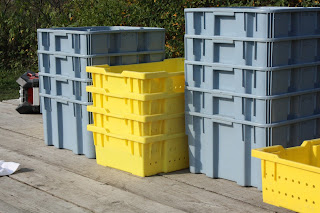 Adding Some Members in the Fall:
If you are a current member with a Traditional 20 farm share, you can extend your season with deliveries 24-28 for only $150!  You will continue to get fresh produce until mid-December.  That includes a delivery of fresh veggies right before Thanksgiving.  Can you imagine being able to provide your extended family with some GFF lettuce as part of the Thanksgiving day meal? 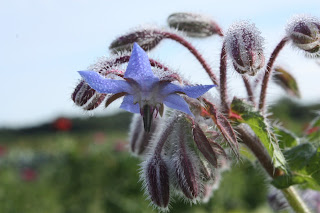 Poultry Orders - Get Those Turkeys Ordered!
Our broiler chickens usually taste very good and we have a hard time eating chicken sourced from elsewhere.
This isn't just us trying to build up our own egos - it's just a fact.  We like how our chicken tastes.

BUT, people who have purchased broilers from us in the past are noticing that they taste EVEN BETTER this year.  Perhaps a bit more moist and tender.  It's really hard to quantify.  It's been enough of an improvement that we've now had multiple people ask us what we are doing differently this season.

Well, it's not the weather, we're pretty sure that's not it - though it has been fairly friendly for our birds.  It's not how we treat the birds, though we always try to do better with them every single season.  We don't think there are any huge changes in our treatment that would alter the taste.

But, we have changed to getting feed from the Canfield Family Farm this year.  While they are not certified organic, all of the grains are grown on their farm and the feed is processed on their farm.  They are located in Dunkerton, so they are fairly close to us AND they're just plain good people trying to make a diverse farm work.  We like the fact that there is a bit more variety of grains in this feed and we like that we can trace all of it (except the added trace minerals) to their farm.

While we can't prove that this is making a difference, we suspect it could be a contributing factor.
Here's the good news.  We have many more broiler chickens available for purchase.  And, the turkeys are being fed grains from the same farm.  We know you've enjoyed the turkeys in the past.  In fact, you got to enjoy some at the GFF Summer Festival if you attended.  What would you say if we're thinking this batch might taste even BETTER?

You'd better get on the ball and get one ordered!


Song of the Month
Paper Route is a group that is new to us, even though they have been around for a while.  Balconies is a song that came around for us at a time when we needed to hear it.  Therefore it gets "song of the month" status.


Recipe of the Month
October shares feature potatoes, onions, kale and garlic - a perfect start to some Zuppa Tuscano!


Field Report
If you have been reading our blog you've probably gotten enough "field report".  But, we'll try to give you some additional information because... well, it's tradition...  We're a farm, we have to give a field report, right?
The most difficult thing for Rob to do this time of year is to walk the fields and do an inspection.  Why?  Well, many of the crops look terrible now.  The once healthy summer squash vines are a shadow of their former selves.  The fields that were weeded and so clean have weeds in them again because we've had little time to do anything about them.  Most of the flowers are past their peak and are looking a little tired.  It can be hard to see all of that because after a season of hard work, you'd like to think that things would look great.  But, it's the way of the growing season for things to fade this time of year.

And then, we notice the monarchs on the clover that we mowed in late August.  We were hoping the timing for mowing was right and it appears that it was.  And the bees have been all over the basil.  Yes, the basil is looking a little rough now.  But, there is still plenty of flowers on the plants and the bees are more than happy to visit.  And, the thousand-flower asters are in full bloom  (and the insects like them too!).

We've got three rows out of twelve potato rows dug and in.  As we expected, we're going to get a mixed bag this year.  We have also pulled in most of the pumpkin-type winter squash.  The average size is a little smaller than usual, but not terribly so.  The numbers are about average, so we should be fine.  The butternut squash are scheduled to come in soon, but they're showing that they would like just a little more time on the vine.

The field tomatoes are telling us they are pretty much done, but the field peppers are actually wanting to give us something before it gets too cold.  Better late than never!  Meanwhile, our fall root and greens crops look fine - as long as we can keep the rabbits and deer out them.  Always something to do on the farm.


Picture of the Month
Guess what?  We like our borage flowers!  You could probably have guessed since there are two pictures of borage in this post.  The first is a more typical picture for us.  But, the dew and sunlight was just right, so I took the picture below.  It looks a good deal better if you click and see a larger rendition of this one. 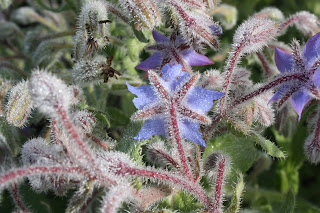 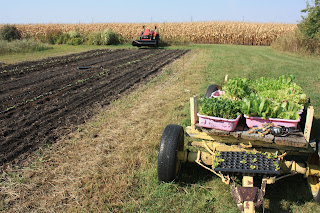 Time to Have Pun
We wanted to let everyone know that our flakiness in our blog is reflected in other ways at our farm as well!  For example, we name our compost piles.  Yes, yes.  We can be a little odd at times.  However, it might help you to understand if we tell you their names.  Mount Evermess and Mount Brushmore.  A few years ago we had a Mount RainHere and then it started raining and didn't stop.  We removed that compost pile.  We are still considering putting a small shed and fence around the asparagus patch.  The shed would have to have an overhang so it could be the Awning of the Cage of Asparagus.  I know, I've done that one before.  But, it would be SOOO good to actually build that thing.

Speaking of building, we're building a portable hen coop and I've considered putting a fireplace in it so we can have a "flue de coop."  But, since that is unlikely, I'll just tell you that we have a portable coop  so we can move them to fresher pasture areas.  In other words, it could be considered a coop de grass.
Posted by Rob Faux at 10:45 AM