Oh, Give Me A Home

Every day, we do chores to support our chicken and turkey flocks in the morning and we do chores for them every evening.  They need to be let out of buildings.  They need food.  The need water.  They need to be locked back in safely at night.  And, of course, we need to collect and clean eggs.  If something happens during the day that requires attention with respect to any of our flocks (hens, henlets, broilers (aka nuggets or boyus) and turkeys) we give it to them.

Of course, there are things that have to happen on a semi-regular basis as well.  We need to move buildings and fences.  We need to add straw to nest boxes and overnight rooms.  We repair shelters and deal with any bird that is injured or ill.

In other words, we do spend a fair amount of time dealing with our poultry flocks each year.  This is why it sometimes hard for us to recall exactly how we USED to do things with the birds.  We get so many repetitions with new things in a short period of time that the "new" thing doesn't seem all that new for long. 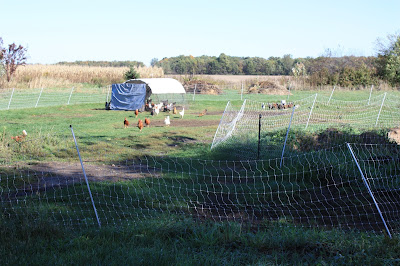 For example, the building above was in poor repair at the end of last season.  Caleb and Rob spent some time on it this Spring (or maybe it was early Summer?) so it could be used by the henlets.  While it wasn't the most difficult job to do in the world, it still took time and effort.

But, I use this as my case in point simply because I couldn't remember for sure WHEN we had refurbished that hoop building.  We've been dealing with it all Summer (and for nearly as long as the young hens (aka henlets) have been alive on the farm). 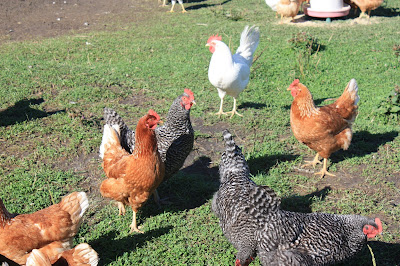 However, it has been time to integrate the young hens into the regular laying flock and move the 'retirees' out of the main flock.  The problem?  We can't just swap buildings.

Well, ok.  We CAN.  But, it isn't the solution we would prefer.  In fact, we've had a dream of creating a much more portable hen building for a few years now.  So, we decided to take this: 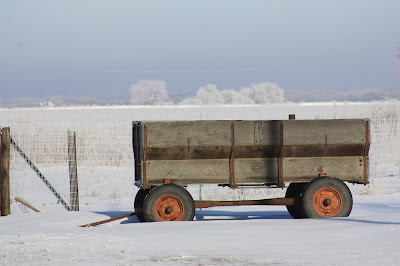 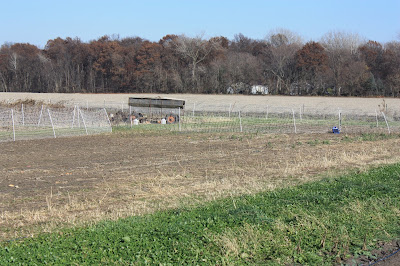 If you'll notice in the picture above, we have used this flair box pretty much "as is" to shelter our retiree hens for the last couple of seasons.  It worked reasonably well... I guess.  But, collecting eggs was pretty difficult since we had to climb INTO the trailer to get them.  And, the roof was a slap together affair that wasn't terribly water tight. 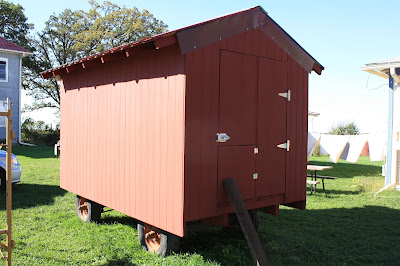 Bryan has done the lion's share of the work on this, but we've had lots of other participants in the project.  Caleb helped Bryan and I put the roof on.  Darrell, Sue and Tammy got it painted.  Jocelyn, Caleb and Emma helped take the old flair box off the running gear.

It's been a project that's taken some time.  But, once it is done, we think we'll have something that will work well for some time to come.