We expect things to get pretty cool in November.  But, we don't usually expect the big chunk of cold we have gotten, with very little sun, since the last week plus in October.  Sure, it happens.  But, usually, we don't have to do some of the things we've had to do already this year until mid-November.  Perhaps we took for granted the past four or five years where we didn't have to worry about temps in the lower teens until November 15.  I guess it isn't that far from November 15 - so maybe we have no right to complain. 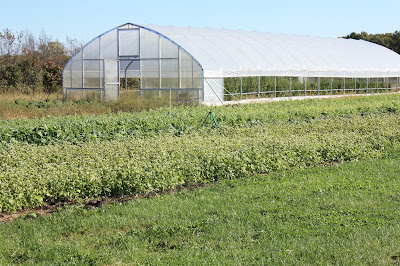 The cover crops South of Valhalla are now a crispy brown mass rather than a green mass.  We were forced to mow the buckwheat down because our first frost was late.  See - that's a good thing - a late frost.  But, boy, once it decided to frost it felt it important to use some emphasis and just get to the hard freeze soon thereafter!

If you look carefully in the center of the picture, you'll see an overhead watering stand.  Yes, that's a reminder that we had a dry patch and we were prepared to water to help the cover crops get started.  Happily, it rained (just a little) right after we set up the sprinkler.  Buckwheat and millet don't need much moisture to get going, so it worked out pretty well.  Now that these plants are dead, we're just going to leave them on top of the soil for the Winter.  This should help hold soil in place and it will allow them to break down naturally and feed our soil and the microbes in the soil. 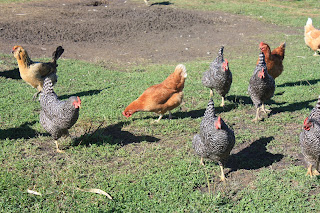 The new hens are now integrated with the regular laying flock.  And, now that the retiring hens are at "Freezer Camp" and the last broiler batch has joined them, we are down to one flock of birds.  That's a relief to both of us - especially when weather gets colder.  We only have to deal with keeping one set of waterers unfrozen! 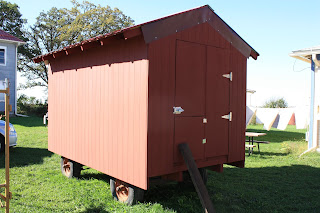 While there are some 'bells and whistles' we want to add to the new portable chicken building, we tried it out for a while with the retiring flock of hens.  They seemed to enjoy it very much.  It is a bit of a ways up to get to it, but once they figured it out, the hens seemed to like to go up and down the ramp we put up for them.  The only issue from their perspective?  Frost makes the ramp slippery.  While the farmer found it funny to watch them slip and slide down the ramp, I suspect they were not as amused. 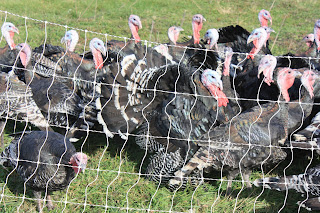 The turkeys took their trip to the park just as the weather was turning to the colder temperatures.  They had a few adventurous days with a strong northwest wind.  But, all in all, they had a pretty good weather year from their perspective. 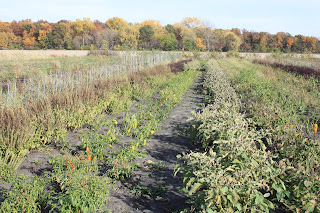 The tomato and pepper field after our first hard frost was a sad sight.  Of course, it is always a bit hard to see plants singed after a frost.  Yes, we could have spent time putting covers on these.  But, it was mid October at the time.  We felt we had gotten what we wanted out of these plants and it would be ok to pull the remaining fruits off and let the frost take them.

The field has already changed dramatically.  The cages for the tomatoes are down.  The peppers and eggplant are pulled and piled so we can take the plant residue to Mount Evermess (our compost piles).  Three beds for garlic are tilled and one and a half are planted. 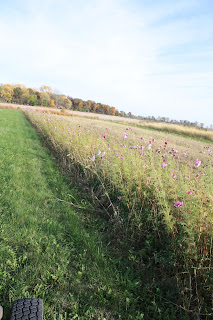 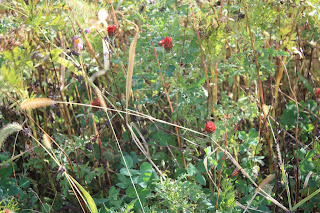 Maybe the clover will stay green.  But the rest?  I think they're done now.
Posted by Rob Faux at 10:05 AM

Email ThisBlogThis!Share to TwitterShare to FacebookShare to Pinterest
Labels: farm report, whether wythards