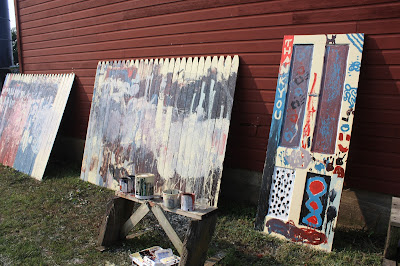 And, it doesn't work.  Or at least, according to some measures, it doesn't appear to work.

Then, the farmer takes a moment and finds a picture like the one above.

And the farmer decides.  He can't do it all.  But, he can do enough.  In fact, he can do more than enough.  Sometimes we have to realize that enough is enough.

How's that for an introduction to a blog post?

So, What's Up For February at the Farm?

February is the month where we begin to plant for the new season.  We will be starting our onion plants in trays along with some herbs and a few flowers.  It is likely that we will be seeding some spinach and other early season crops for the high tunnels as well.  There won't be too much planting just yet, but there is enough to keep us involved in the growing process.

Perhaps the biggest thing to accomplish in February is the purchase of supplies and new equipment for the upcoming season.  The seed orders get made (and paid for).  Plant starting mix, drip tape and numerous other items also are identified and ordered (and paid for).  In short, there is a good deal of research and evaluation of product that is paired with budget projections so we can figure out where a significant portion of our money will go for the season.

Of course, we still have laying hens on the farm, and they require daily attention.  On the colder days, there are many visits out to the hen room to collect eggs before they freeze.  On the warmer days, we try to encourage the hens to run around the pasture more.  Apparently they aren't too keen on aerobics classes, so we'll settle for throwing a few treats out there for them to chase.

While it is not a 'farm' thing, we are also engaged in trying to get some home repair projects going.  It is true that we might prefer to do some of these things in warmer weather.  But, growing things tends to take up our time in the warmer months.  I guess that leaves January and February for home projects.

As I write this, I realize how sneaky-busy February is for us at the farm.  We set up research projects, do our taxes, promote the new season's CSA, work to find other outlets for our produce and we continue to sell eggs, chickens and whatever produce remains from last season.  The organic certification paperwork is due and Rob has a few presentations scheduled.

If that all sounds like too much office work and not enough "real" farm work, then we'll remind you that we also have to do some repairs to the high tunnels and there is still old trellising to take down in one building.  We've got containers to clean and some electrical to run in a couple of the buildings.  That ought to do it!

And now you know what this farmer is doing this February.
Posted by Rob Faux at 5:30 AM