Annual Traditions We Can Do Without

Here we are, now in the month of February and it is time for the monthly Genuine Faux Farm newsletter!  It's an exciting moment, especially considering the lack of posts for the past couple of weeks on this blog.  We did manage to get all of our "year in review" type of posts out there to bid adieu to 2017, but that's really all we managed to do in January.  Apparently, this is a trend (if not a tradition) since there were not many posts in January and February for 2016 and 2017.

The "tradition" behind the trend has to do with Rob's knack of catching some sort of nasty virus in late January that knocks him down for a week, or two... or more.  In this case, it was more like a week - so that's not so bad.  But, everyone knows how that sort of thing can really mess with motivations and habits.  And, of course, the nice long list of things that need to be done got no shorter during that time.  Things that I thought I was right on top of are now behind schedule.  Little things become bigger things and big things become daunting.  Add in my tendency to want to do things "well" and a reticence to do just enough to "get by" and you have a recipe for a January/February slump.

The third part of the puzzle is the natural desire I have to do things that are NOT farm related during the Winter months.  Don't get me wrong, I do like doing farm things.  But, I also like doing OTHER things.  During the growing season, it is difficult to do any of the "other" things, so it is perfectly natural to want to put the farm down the priority list for a while.  The hard part is giving myself permission to do that without feeling guilty and then still managing to keep myself in farm mode enough to get things done that need doing in a timely fashion.  After all, say what I will, the farm never gets to be down on the priority list.  Something needs to be getting done all the time.

Here's to breaking the annual tradition of struggling to finding the balance again after annual "virus enforced vacation."  Time to get back into VAPs and the accomplishments that hopefully come with it.

Picture of the Month
It's been a pretty brown Winter so far.  Our biggest 'snowstorm' for the year actually ended up being lots and lots of rain (2 inches) in January.  Point North and West got the snow, but we just got the rain.  Forecast was for a half inch, but we like to do better than expected around here! 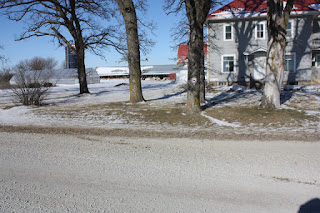 Frozen ground with rain results in all sorts of puddles.  But, did I get the camera out to record this momentous event?  Of course not, that would have been useful for the blog.  Bad farmer, bad!  He'll get back at it and take some pictures once the forecast snowfall makes things beautiful again.

Farm News Shorts and Announcements
February Calendar
Subject to change since February is "Set the Calendar for the Farm Month:"
Weather Wythards
The summary will be a bit skewed because our weather station battery died in the middle of the coldest days at the beginning of the month.  I think we can be forgiven if we decided we didn't want to go out and change the battery when the windchills were at their worst.  As a result, our numbers, while still somewhat impressive on the colder extreme, do not accurately portray what happened during the super cold spell.


Song of the Month
February's song of the month is quite a bit 'louder' than most of our songs of the month.  Nothing More's "Do You Really Want It?" is a reminder that if you don't like what's going on in the world, change starts with you.  But, sometimes, changing yourself is the hardest thing to do:


Recipe of the Month
We are continuing to take a break from recipe of the month.  These will appear with regularity as the growing season gets going.

Time to Have Pun
A combination of colder weather with some strong winds and the wonderful respiratory distress that comes with the annual "virus vacation" tends to make trips out to deal with the chickens and other farm chores a bit less pleasant than they might be.  But, we still get to see the small snow birds flitting around, which can be pretty enjoyable.  On the other hand, we have noticed more activity from the crows around the farm lately.  If you're already feeling under the weather, you may tend to think less positively about crows and all of their noise.  If you're feeling particularly gloomy, you may begin to think about all of the reasons why a group of crows could be called a "murder."

I guess it all depends on whether or not you think there is probable caws.
Posted by Rob Faux at 12:20 PM