Every once in a while, Tammy and I see something and say, "Hm, that might be interesting for other people to see on the blog."  Sadly, most of the time, we say this when neither of us is prepared to write it down.  As a result, there are a whole bunch of great ideas that fall out of our brains and rattle around on the floor.  So, if you see some of our ideas sitting on the edge of street somewhere, please direct them to us.

Genuine Faux Farm By the Numbers
Many of you already know that Rob likes his numbers.  Sometimes, the numbers actually interest other people as well, so we thought we would share a few that might be enjoyable.

120,297 - the number of eggs our laying hens have produced from 2012 to 2017.  No, it's not the same group of laying hens every year.  We have a great post about the ladies that answers a number of questions about how we raise the birds.  Now is a good time to point you to the Poultry Slam post from 2015.

36,827 - the number of cucumbers harvested on our farm since 2006.  Yep, that's about 3000 a year.  All that time picking cucumbers and wondering when the cucumber frog is going to startle the farmer...

164 and 11.1 - the number of songs a typical GFF month's music play list contains and the number of hours that playlist would normally take to play in its entirety.  Last year's Harvest Festival play list was only 134 songs, so I guess I fell short on that one, but the days were getting shorter, so 8.8 hours was usually pretty good.

250, 350, 400, 500, 600, 800 - the number of dollars it takes to sign up for one of our CSA share programs.  There are many options that may fit you and your family.  Luckily enough for you, we have openings and are now taking reservations!  Prices on the website are current, even if the farmer missed changing the year date on the web.

There WERE Foxes on the Genuine Faux Farm

In 2007/2008, after the old hog building came down, a vixen decided we had the perfect place to raise a few kits.  We were able to get a few pictures and were also able to contact photographer, Kip Ladage.  Kip came out and got some great pictures (one of which is signed and hanging on our kitchen wall).  Once he had captured his photos, we went about our normal business of farming.  This was too much for Mama and she moved the kits away soon after.  Frankly, if they would have entered a contract of not killing all of our chickens, we'd have been happy to have them stay.  But, having us as their neighbors was just a bit too close for comfort from their perspective.

That Old Barn Was Good for Something 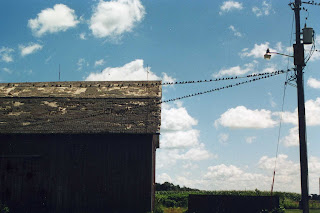 Those who have been to the farm over the last five or so years, but not prior, have not seen the old barn with a roof and siding.  While was still largely intact it was the perfect nesting space for barn swallows.  There were always two major hatchings of chicks and once they fledged we'd get to see the grand line-up on the electric lines.  Sadly, with fewer nesting spots, we don't get to see this any more.

The Year the Cucumbers Would NOT Grow
The farm is full of lessons of humility.  One of our earliest such lessons came in 2008 when we had a year where one of the 'easiest' crops to grow simply wouldn't.  The following year was a bit better, but 2010 was the year of the cucumber.

Young Horticulturalist?
Would you like your plants to get big and healthy this year?  Diligently prune off the flowers just as Tammy did in her family's garden.  Just remember that you won't get any fruit if you take off ALL the flowers.  But, then again, if that's the goal you want....

Deliveries by GFF Started Earlier Than You Think
Officially, the Genuine Faux Farm started operations in 2005.  But, the very first deliveries were made years earlier - even before Rob and Tammy met.  The produce came from the 'garden' Grandpa Faux maintained and he was happy to have a high school baseball player available to run the gauntlet that were essentially 'drive-by vegetablings.'
Posted by Rob Faux at 10:47 AM

Email ThisBlogThis!Share to TwitterShare to FacebookShare to Pinterest
Labels: general strangeness and minions, Paint by Number