We've done various "Cast of Characters" posts on the blog for our farm in the past, but the only constant is change (or so they say).  That, and we are fully aware that blogs, social media and other electronic publications "scroll down" and out of view to many.  We can certainly try to link you back to prior posts (like we did in the first sentence) but we're are certain that the number of times people take those links is infrequent.

Outdoor Farm Management
The Sandman continues to hold the position as farm Spokescat.  As you can see, he takes this position seriously, posing for promotional pictures and illustrating the proper use of a wheelbarrow.
With Mrranda and Cubbie gone on to the Great Hunting/Napping Grounds we now have Inspector and Soup rounding out the outdoor management staff.  Inspector has become the official "Greeter" and "Affection Seeker" for the farm.  He likes most everybody and will accept attention with a nice purr.  Inspector is Soup's son and he still treats mom with respect.  What a nice young man he is!

Soup has taken some time to integrate into the farm.  She's less certain of people, but once she warms up you will learn where Inspector got the purr from.  Oddly, Soup has not taken on a specific role on the farm.  We're not sure what the reasons might be, but we're willing to be patient.

You Name Trees?
Yes, yes we do.  At least we name some of them.  I think it started with Jeff Vader (the cottonwood) and we were not the ones guilty of naming it.  We were just guilty of adapting to using it and then sharing with others.  On the other hand, we are guilty of naming Crazy Ole' Maurice.

You probably know that we like Lord of the Rings and you can probably guess that we enjoy the part with Old Man Willow and Tom Bombadill.  However, this willow tree is not really an Old Man Willow type.  He's got kind of the Einstein haircut and he is far from menacing.  And, since we often reference Beauty and the Beast with our Dangerous Pastime posts, it seemed fitting to name a willow this way.

No, I don't know exactly why it seemed fitting.  It just did.  It's the farm, it doesn't have to make sense.
They Come and They Go
Sometimes participants in daily farm life are only there for a limited duration.  For example, baby barn swallows only stay babies for so long before they fledge and fly around, eventually moving away for the Winter.  I've taken to calling the babies in the nest the "Nixons" because they look like they have jowls that even Richard Nixon could have appreciated.
Meanwhile, we get visits every 28 days from the Moon.  Who else can say that?  We're pretty special, huh?

What?  What do you mean the Moon visits you too?  Wha?
The Chalkdoor Speaks
Ok, Chalkdoor doesn't really speak.  But, it sure does get a fair amount of attention during the growing season.  It's only been active since last summer, but it feels like we've been using it for longer than that. 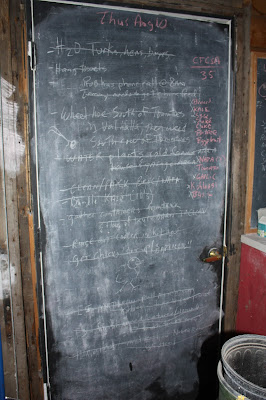 As you may notice, we don't always limit ourselves to words on Chalkdoor.  Every so often a baby chick might show (see bottom 1/2) or maybe a wheelhoe (top left).

Oh Look!  A Bird!
We must like birds because we willingly host hundreds of them every year.

August is the time of year when we have five flocks on the farm at one time (used to be six flocks when we had ducks!).  The turks have a decent sized pasture North of the Poultry Pavilion and have a pasture that borders with the hens and Crazy Ole Maurice's domain.  Minnie the Might Oak is among a few small trees we're trying to grow in their pasture so future flocks can enjoy a little shade during hot days.
The "Henlets" (this years young hens) have not yet been integrated into the main laying flock (aka "the Ladies"), though that day is coming (some times in the next 2-3 weeks).  Meanwhile, we have the "Boyus" are in a different section of pasture.  These are the older broiler chickens that are soon approaching their trip to "the Park" and then some time at "Freezer Camp."  "The Nuggets" are still in the brooder room and consist of the next batch of broiler chickens that will go to the park in early November.

We hope you enjoyed this quick tour of some of the characters you might find at the Genuine Faux Farm.
Posted by Rob Faux at 5:00 AM