It has been two years (yikes!) since Tammy and I took our great adventure to the island of Kauai and I was digging through the 'draft' posts in the blog that are waiting for completion and found an early post that just did not get put out there.  I thought it might be fun to flesh it out a little.

Cardinal vs Rear-View Mirror
Our first location in Kalaheo was a small cottage in town.  One of the biggest selling points for us was the kitchen, since we did not intend on eating every meal 'out.'  After all, that's a quick way to require a shorter vacation from a budget perspective!

The first morning, we kept hearing a tapping sound that seemed to be coming from just outside the cottage.  It took us a while to figure it out (see the photo below). 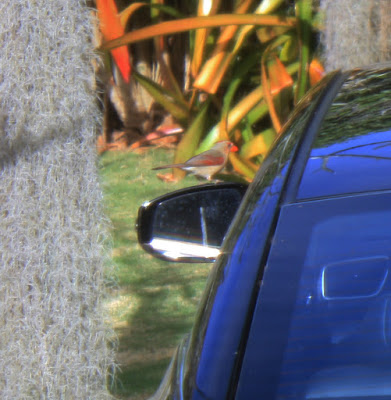 For some reason, this female cardinal decided the rear view mirrors on the rental car were evil!  I know that it was seeing itself in the mirror and thought it had to defend against an intruder.  But, geez, didn't you have to get yourself into just the right spot to see the offending critter so you could attack it?  We're kind of wondering how this bird knew if it had won or not.

Of course, you might also want to wonder why there is a cardinal on Kauai.  There are, actually a number of birds that came to the island with human 'help.'  Sadly, many of the birds native to the islands are scarce or extinct.  But, that doesn't mean we blame this cardinal - nor were we sad to see it.

Other 'out of place' wild-life we saw were Meadowlarks and Tiger Swallowtails.  These are two critters we would welcome on our farm, but we had to go to Kauai, where they are not native, to see them.  Once again, we were happy to see them - but a bit disturbed by how humans make native habitats less hospitable for natural populations.


We were actually surprised by how few spiders there are on the island - and we were also a bit surprised by the relatively low population of invertebrates, their food source.  Nonetheless, our first location featured a few very nice webs created by orb-weavers that looked very much like the "Shelob's" we welcome on the farm. 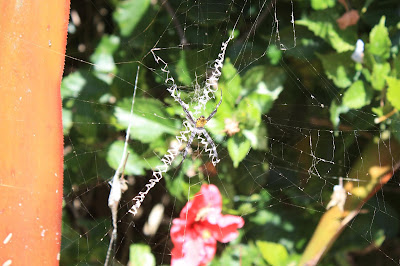 Once again, I was a little disturbed by the fact that I found more orb-weavers in Kauai than we've seen in recent years on our farm.  We haven't seen them on the farm since 2012, when our farm had a fly-over spray incident.  It makes me wonder if I should import a couple of orb-weavers from someone else's farm to repopulate ours.

It's clear to me that I shouldn't have to fly over the Pacific Ocean to a small island to see some of the wildlife that should love the Genuine Faux Farm!

The words "Oh look!  A rooster." - with no small amount of emphasis on the ridiculousness of the situation - escaped our lips multiple times.  Kauai has a thriving population of what some people call 'feral chickens,' while others refer to them as 'red junglefowl.'  The first junglefowl were brought to the island by Polynesians about 800 years ago and more European strains came after Captain Cook found the islands in the 1700s.  Things got even more interesting when a couple of hurricanes freed many of the domesticated (and contained) flocks in 1982 and 1992.  Scientists find it to be an interesting study of genealogy.

Also note - chickens do cross the road in Kauai. 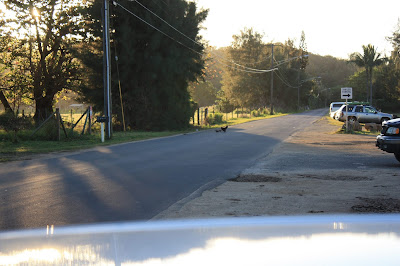 Unlike many tourists, we were not terribly impressed by the chickens.  I mean - we went there to get AWAY from the farm for a while.  The other thing to note is that chickens on Kauai seem to know that it is 5 AM (at least they do at Koke'e State Park).  And they ALL crow at exactly the same time.  Especially the one that has taken up a post right next the window of the cabin you are staying in at the time.

Speaking of mornings and evenings (we were?), sunrise and sunset on Kauai can be pretty quick.  In Iowa we are used to a bit more twilit skies - often lasting quite a while during the longest days and shortest days of the year.  That's probably why the chickens of Kauai start before there is some light.  They've slept enough and just want to tell you it's still an hour until the sun pops up.

While temperatures have been pretty moderate so far this Winter, we figure talk of a warmer clime is not an all bad thing for a January blog post.  We hope you enjoyed it and we hope you have a great day.

Email ThisBlogThis!Share to TwitterShare to FacebookShare to Pinterest
Labels: faux animaux, Look in the Mirror, travelog