The Eagle Has Landed Again

The new normal for me (and for many) is Zoom meetings and wistful looks out the window.  During a meeting not too long ago I looked out the window to see a Bald Eagle sitting in the tree.  It must have noticed me turn my head because it took off almost immediately.

A few days later, it was there again and I was able to explain to people in the meeting why I kept looking away from the screen.  This, of course, derailed the meeting for a time while people talked about Bald Eagles.  Frankly - I don't feel it was a waste of time.

This reminded me of some reading a did a couple years ago regarding the number of extinctions that have occurred on this planet since 1900 and found myself becoming increasingly disgusted by humanity's lack of foresight and general selfishness.  While it is true that some extinctions are a result of natural changes and natural disasters, the most common primary cause appears to be the intentional or unintentional results of human actions.

The Bald Eagle - so far - is an exception.  It has come back from near extinction.  Tammy and I are among the members of the current population in the United States that maintain a fascination for these raptors.  As we were growing up, there were perhaps 500 nesting pairs of Bald Eagles in the entire lower 48 states and we were told that it would be a very rare thing for us to see a Bald Eagle at any point in our lives.  If you do not recall, the population had been declining as a result of habitat destruction, DDT poisoning and people shooting the birds. 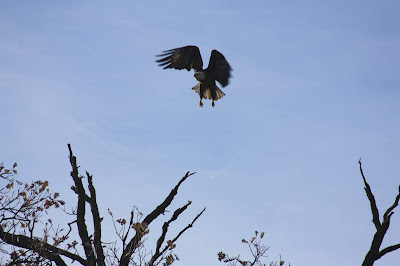 And now, we have Bald Eagles landing on the oak trees at our farm.

A 2007 report showed 200 breeding pairs in Iowa alone.  Clearly, the population is recovering, though it is far from its former glories.  And despite the fact that Tammy and I are often graced with a sighting of a Bald Eagle multiple times a week during the colder months, we still find their presence to be a reward of a sorts.  You see, it was impressed upon us that preserving this population was important.   Having a Bald Eagle on the farm is rewarding for us - even as we realize we need to monitor the chickens a bit more while they are around.  We welcome them with the realization that they symbolize the possibility that humanity CAN, if it wants to, do something to support the success of other species.

The problem is that we have to do more than just leave things alone to prosper.  There are all sorts of unintended consequences that can cause the decline of a natural population.  For example, Bald Eagles in our area are subject to lead poisoning when they consume the offal left by hunters.   It is not necessarily a bad thing that the remains are left for the scavenger birds (such as Bald Eagles), but the lead ammunition is causing a problem.

Just think - I am sure hunters are not intentionally looking to harm the eagle population, yet they are.  If we can cause so much harm without meaning to, just think how rough we are on other species when we go after them with a will.  I'd tell you to ask the Passenger Pigeon, but there aren't any to ask.

The original post on this topic was shared on our blog January 9, 2019.  I updated it a little bit and added a few edits.  But, the topic is still a very important one.  In particular, I want to emphasize once again that we CAN make all sorts of good things happen if we decide we want to.  The question is - what will it take to get us to decide to do good things?