Rob just had the privilege to speak to a group of cool people at Wartburg about diversity on the farm.  This included some information on 'companion planting.'

In the process of preparing for the topic, there were some quick searches to see what new things were out there on the topic.  The first thing I ran into was a short article that sounded like it was hot to debunk companion planting.  Since I want to hear more than one side of an argument, I read it.  And, it turns out that they do not like the use of the terminology because many of those who use that term also use questionable analysis in determining good 'companions.'  In fact, they agreed that there are many beneficial (and non beneficial) plant relationships.  In their mind, it is preferable to use "plant associations" to describe the concept.  They also concede that polyculture or intercropping would be a bit better as well.

Ok, I bit.  Web searches  for plant associations find me all kinds of articles, research, etc that primarily covers forests, prairies and even water systems.

While the terminology may be more accurate and less biased, I sure can't find anything I might care about for growing fruits and vegetables using those terms.  On the other hand, "intercropping" is a pretty good term - but tends to provide me with larger farming system information.  Personally, I am happy to see legumes intercropped with field corn.  But, I'm afraid my 14 acres won't accept that as part of my farming efforts!

On the other hand, there are some interesting studies out there with some cool results.  The problem is that there are only 'some' of these studies.  Funding sources don't appear to be as attracted to this sort of research as they are for GMO seed or the relative safety of glysophates (ok, don't get me started).  You can argue that these things have their place - but they are currently crowding out a whole host of viable tools in the farming toolbox.  When all I have in the toolbox is a hammer, everything looks like a nail.

Here is one chart that amazed me. 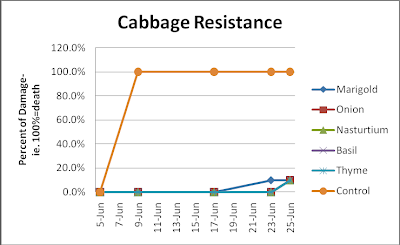 Look at it carefully.  The control would be cabbage in a study that had NO companion plant nearby.  The others are different types of companions.  By June 9, every plant in the control had damage from cabbage worm/cabbage looper.  NONE of the others had damage at that point.  This is a small ISU study which admittedly only has 2 replications and could stand to be a bit more rigorous.  But, consider this - in other fields, a pilot study that produced results this clear would be followed up in a potentially grand scale -wouldn't it?  And, last I looked, four of the five could be a potential cash crop for the farmer as well as the cabbage.

Well, perhaps not.  But, Practical Farmers of Iowa is looking to perform a study on cabbage looper and cabbage worm control in cabbage.  If it gets the go ahead, we anticipate that we will be involved in this study.  On the docket is thyme as a companion.  We'll see if others are included.
Posted by Rob Faux at 3:25 PM