We haven't made much noise about melons since 2007, which is the last year we had a productive crop (until 2012).  Some of the problems were unavoidable (flooded out 2008, too cold 2009), others were a priority issue (wet fields prevented us from getting to lowest priority crops in 2010).  But, each year we've learned a bit more about growing, acquired better tools and we're getting to the point where some of the lower priority crops are getting more attention.

As a result, you actually get a post about some of our choices for the 2013 melon crop.  Again - as with the tomatoes, we'd be happy to hear your input.

Too Good Not To Grow: 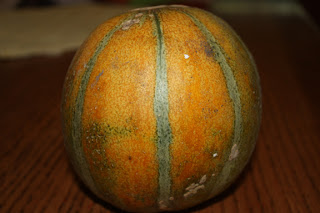 Ha-Ogen (Seed Savers, High Mowing)
Ever since we threw some of these into the high tunnel in 2010, we've been hooked.  These are white/green with some gold in the seed cavity and we liken the taste to a banana...sort of.  Don't expect a taste that is like a traditional muskmelon or honeydew.  In fact, don't make a judgement on the very first taste.  Let it sit in your mouth for a second and then tell us it isn't one of the most interesting and delicious melons you've ever tasted.  We'd like to accomplish enough of a crop to build a market for these beyond the farm share CSA, but we intend on putting some out for your selection in shares as well.

Hearts of Gold (Seed Savers)
The responses we got from farm share members for Hearts of Gold was pretty much what we expected.  This is one excellent tasting muskmelon.  They can be very fragrant and difficult to figure out when to pick.  But, if you learn the tricks, they are well worth it.  High praise for taste and production.  We'd like to hand one of these to each Farm Share CSA member in 2013.  Here's hoping!


Pride of Wisconsin (Seed Savers)
Another muskmelon that is very reliable and bigger than Hearts of Gold.  These are less fragrant and are a little bit milder in taste than Pride of Wisconsin.  We enjoy them very much and they are great if you are looking for a refreshing taste with some sweetness.  People who favor less strength in flavor find these to be very pleasant and to their liking.  They also will sit on the counter longer so you don't have to run home and eat it right away! 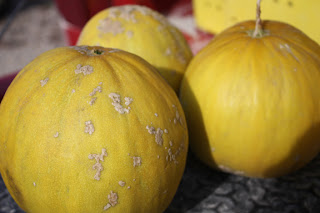 Boule d'Or (Seed Savers)
This is a long season melon (green interior), known as a Winter melon.  These can store on the counter for quite some time before eating as they have a very hard shell.  They are also a longer season melon, so we need to work on getting them into the ground a bit earlier in 2013.  Taste is closer to a typical honeydew, with a bit of a twist.  With a better mulching program we expect an excellent crop of these in the Fall.

Oka (Seed Savers, Fedco)
Oka got our attention in 2010 when it produced a couple late in the year in the high tunnel.  We loved the taste and think you will as well.  The difficulty is that the pests seem to like this one alot and they can get past the rind a bit too easily.  However, there were some extenuating circumstances that we think we can address.  If we have an issue with securing seed or other problems, we may drop this one for the year.  But, memories of tastiness make it hard to do that.

Minnesota Midget (Seed Savers, Johnny's)
Smaller, netted fruit on short vines.  It seems like they would be perfect for the high tunnel.  So, that's where they will go.  Melons in late June or early July if this works.  If it doesn't, it will have been worth the try, we think.

Sakata's Sweet (Seed Savers)
Smaller green fleshed fruit.  We have never grown this one.  But, it climbs trellis (or so we're told).  And, that characteristic makes it a good trial for the high tunnel in 2013.  We'll do a small batch just to see if it is worth it.

Maybe - What do you think?
Eden's Gem (Seed Savers, Johnny's)
We grew this one in 2006 and 2007 with success.  Small melons with green flesh.  Kind of a nutmeg overtone to the flavor, very intriguing.  These are very productive in the field and very much did not like the high tunnel in 2010 or 2011.  These are single serving sized melons and if they do well, we could have alot of them.  If you are tired of the tasteless melons you can get at the store, these will meet your needs.

Rocky Ford (High Mowing)
Similar to Eden's Gem.  We'll do this one or Eden's Gem if we do either.  We're trying to determine if there is enough of a difference to go one way versus the other without having to execute a trial of our own this year.

Emerald Gem (Seed Savers, High Mowing)
Slightly bigger than Eden's and orange fleshed.  They produce about the same size as Hearts of Gold and during the same period.  They are a bit less musky, can be very productive and are not quite as soft, so they can sit on the counter for a bit longer than Hearts of Gold.  We tend to prefer Hearts of Gold for the sweeter taste, but are there people out there who want something a little tamer?  Would you like a little more shelf life?

Crane (Seed Savers)
Crane is a Crenshaw type of melon.  We have no problems with the melon and find it cool that it changes color when it is ripe.  This certainly improves the chances that we won't miss one when it is ready.  But, we had trouble with them going bad on the vine last year.  Frankly, we were so happy with the others that this one didn't get the attention it likely deserved.  Of these, this is least likely to return.  If we had unlimited space, I'd still like to give it another shot.  But, we don't.

Not This Year
Amish (Seed Savers)
These did just fine for us when we tried them several years ago, but they did not distinguish themselves from Pride of Wisconsin.  No reason to grow both, unless someone can convince us otherwise.

Canoe Creek Colossal (Seed Savers)
A casaba type melon that gets to a large size.  We can't find it in any catalogs, so it isn't an option for us right now.  And, the large size and soft skin makes it difficult to use as a "commercial" melon.  But, they were fun to grow and very tasty.

Petit Gris de Rennes (Seed Savers, Fedco)
Word on the street is that these taste great, but are difficult to grow and very inconsistent.  Maybe sometime in the future, but we want to establish a better track record first.

Prescott Fond Blanc (Seed Savers, Fedco)
We love the idea of this Rock Melon, but it was the only melon to fail in 2007.  It appears to be operate as a catch crop for some pests.  If we do this again, it will be a couple of plants just to show we can grow one out.

Schoon's Hard Shell (Seed Savers)
Similar issue to Amish, very similar to Pride of Wisconsin.  Maybe sometime in the future, we'll run a head to head trial.  But not now.
Posted by Rob Faux at 10:04 AM