It is the season of seed catalogs, orders, promotion of our farm share CSA, planning, planning and planning.  We have to do our organic certification paperwork, taxes, budget and whatever else we always do.  But, this season we also have to work on establishing a value lost to the spraying that occurred on our farm this past summer.

One of the exercises I use is to figure out our crop value per acre for a given plot/field on our farm.  Conventional wisdom for a diversified vegetable farm, such as ours, is that we should be landing somewhere in the $12,000/$15,000 per acre for all producing land.  And, a recent presentation suggested that a small farm might need to exceed $20,000 an acre.

So, I began crunching numbers I've already recorded (there are many others I have yet to transfer to the spreadsheets).  And, of course, I wanted to see how a field I perceive as having good value did this year.

Beans and potatoes (E2) - roughly .25 acre
Included in this field are potatoes (5 types), green beans and a number of different dry beans (which are not included in the analysis).
We picked 1009+ pounds of green beans out of this field (a record) and we assign a value of $3 per pound to this crop (it is a high labor crop and requires a higher purchase price to make any money).
We also picked about 1400 pounds of potatoes at $2 a pound in value.  We realize you can get potatoes much cheaper than that - but you can't get certified organic potatoes many places at all (but that's a different story).
Value of the field: $5,880
Value per acre: $23,520

Since this is not about labor cost, we'll leave this number there and hold it up as a pretty good indicator of health for this field in our rotation.  It also shows me that this field is very important for the success of our farm.  A good indicator for priority efforts. 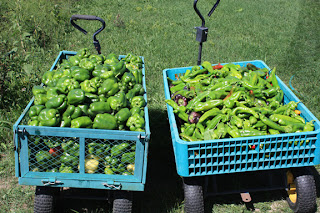 Peppers and Eggplant (SW) - roughly .2 acres
This field was sprayed in July and we were forced to throw all produce away.  Based on some of our data for 2012 and historical records we can make a few estimates (that we will fine tune a bit more).
Sweet Peppers were heading for a record in production = $2500
Hot Peppers were at least at prior year levels = $500
Eggplant were looking a bit slower than last year, but picked it up after some rain, trending to be 80% of last year's crop = $1750
Green Beans (yes there were some in there) = $900
Other crops (dry bean, okra) we are not assigning value at this time.
Value of the field (at this point of analysis): $5,650
Value per acre: $28,250 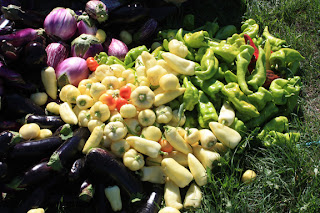 High Tunnel Production (HTW) - roughly .05 acre
We were able to pull in production in the Spring.  But, since it was in the spray zone, we were unable to get anything else of value out of it this year.
Spring Value of crops: $1,183
Spring value per acre: $23,866

Caveats include the fact that we didn't push the high tunnel planting for the early season.   This was, in part, because Tammy was on sabbatical and we knew we would be away a bit more than usual.  It was also, in part, to assure that we would get the summer crops in on time - a problem we had the prior year.  Even with that, production per acre was already as high as what I tagged as one of our better fields.

Here's where it begins to hurt.  We expect to get three crops per year from the high tunnel - then we move the tunnel for the next season.  Using the simplest extrapolation, we can just triple the Spring number, even though it is inaccurate on the low side.

Projected ( with simple low estimates) value per acre in HTW: $71,598
Ok - the reality is that this translates to $3549 in real money to the farm.  But, that isn't the point here.  The point is that our most valuable land was sprayed and taken out of production by someone other than us.  That hurts.
If we go with numbers that are in keeping with what I think we should have gotten for crop value in Summer and Fall high tunnel crops our value per acre in the high tunnel exceeds six digits.  Yikes! 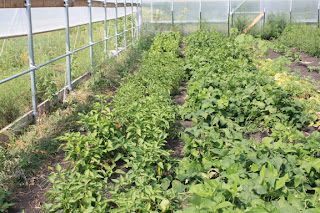