The seed catalogs are here and we're beginning to make determinations as to which varieties stay, which varieties go and which new introductions we will make to our farm.

Black Cherry (Seed Savers)
Our criteria for cherry tomatoes are:
1. great taste
2. easy to pick, growing in cluster and tomatoes about 1" in size
3. don't split so easily that we can't hope to get them to people

And, to be perfectly frank, if it fails to meet those criteria we'll only grow a plant or two for ourselves at most.  Or - if someone really begged us, we'd start plants and sell them.  Black Cherry fits these criteria according the catalog.  But, not every tomato matches the catalog once it gets to the farm - that's why we do trials.  There is a reasonably good chance we'll try this one.

Dester (Seed Savers)
The main reason we are considering this one is the results of the 2011 and 2012 Tomato Tasting results for Seed Savers.  A win in 2011 and runner up in 2012.  It looks like a slightly smaller German Pink by description.  We're not entirely sure it is needed on the farm, but it is difficult to ignore high ratings for taste.

Paul Robeson (Seed Savers)
We've seen this one in other catalogs and found it intriguing.  Since we are fans of Black Krim and its complex flavor, I suspect we may become fans of this one as well.  The real win for us here could be that it fills a bit of a niche rather than being a bit of a duplicate to things we already grow (like Dester/German Pink).  Like most Eastern European heirloom varieties, we expect that you have to give yourself a season to learn when to pick them.

Peach Blow Sutton (Seed Savers)
Look, we doesn't names them, we just selects and grows them... These are a smaller slicing tomato with low acidity (sweeter taste), but it is a pinkish red.  Most low acid tomatoes tend to be yellows.  It's unique enough that we may have to give this one a try.

Indigo Rose (High Mowing)
Another rule for selecting new tomatoes is that they have to come from one of the seed houses we fully trust and intend on ordering from.  And, we also have learned over time which types of seed we prefer from each of these companies.  As you can see, we favor Seed Savers for the tomatoes.  But, High Mowing has yet to steer us wrong.  Indigo Rose is a salad size (2 oz) tomato that is a blackish red in color.  We appreciate seeing a new variety that is an open pollinated, rather than a hybrid and intend to support the effort by giving this one a try (despite the fact that so many people are pushing it - we're not really bandwagon sorts of people).

Goodbye - maybe just for now or for good:

We will be dropping some tomato varieties and making adjustments to others.  This doesn't always mean the variety was a failure.  But, it does mean we have reasons for changing their status.  It's only fair we put them here in case someone really doesn't want us to drop one.

Silvery Fir Tree (Seed Savers)
Before you get too excited, we are only dropping these from production.  We will still start plants for sale.  We are very aware that these work wonderfully in pots and know many of you want them again this year.  But, it is clear to us that they don't offer anything to our production in the field or the high tunnel.  And, we don't intend on growing a bunch of container plants ourselves.  We'll likely find ourselves stuck with a few anyway and will hate to kill them.  But, we can only do so much.

Beams Yellow Pear (Seed Savers)
They taste great.  They are very vigorous.  We can't pick them easily and they tend to split or have small blemishes that leave us irritated trying to find marketable fruit.  It is likely more our fault than the plant since they've fallen down our priority list for picking.  We expect to have some plants for sale in 2013, but if we don't hear much complaint, we may not bring them back again.

Kellogg's Breakfast (Seed Savers)
Simply put, Dr Wyche's Yellow beat it fair and square.  We like Kellogg's Breakfast well enough and may use up leftover seed for some plants at market.  But, sometimes you have to simplify a little.

Siberian (Seed Savers)
Aside from one really good year (a very cool season - 2009), this one doesn't do much for us.  We know they excel in northern Minnesota - but that's not where our market is.  We'll let Stupice handle earliest tomato honors.

Violet Jasper and Topaz (Baker Creek)
Violet Jasper produced tomatoes smaller than we wanted for the purpose we intended and Topaz didn't do anything to recommend it over the Red Zebra/Green Zebra pairing we enjoy.  Baker Creek is a great seed source if you are zone 5 or further south.  But, we're not sure the things that do best for them match up with us very well.  If we have seed left over and space, we may plant some out for sale.

Aunt Ruby's German Green (Seed Savers)
Shaped like a German Pink, but Green when ripe.  These taste pretty good, but we struggle with getting salable fruit from these plants.  And, we actually like Tasty Evergreen for taste better than these.  So, we'll bump that one up a little in production and drop this one.

Cherokee Purple (Seed Savers)
It is official, on our farm, Black Krim is the king of the purple/black tomatoes.  Cherokee Purple really has never kept up with Black Krim in production or taste or quality.  Really, Cherokee Purple is fine.  But, on our farm, Black Krim simply has done better in every weather configuration.  It even did better in the high tunnel than Cherokee.  It would make sense to keep it if it showed a weather situation where it did better so we would have insurance on this type of tomato.  But, it has not.

We will be increasing the production of the following (at least a little bit). 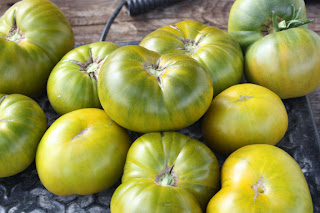 Tasty Evergreen gets some of Aunt Ruby's production space. 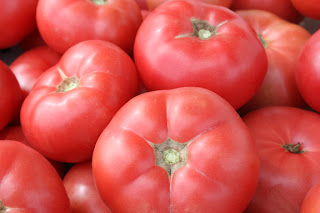 On a Short Leash
Roman Candle  it seems to appear and reappear as an available tomato.  We're not sold that we absolutely MUST track it down in the future if it disappears again. 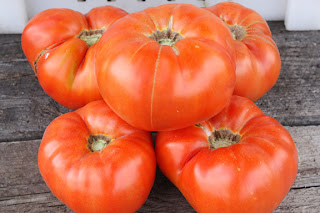 Ponderosa Red is an old beefsteak variety.  It picks hard and hasn't fully distinguished itself.  But, it hasn't exactly been bad either.  We'll likely give it another run. 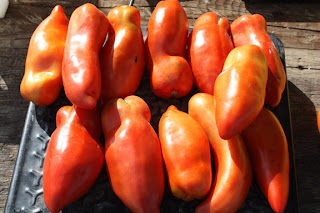 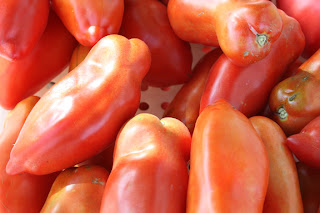 For the right to stay on the farm, these two Polish paste style tomatoes will be run head to head once again.  The slightly larger size recommends Federle and the slightly shorter window to ripeness recommends Opalka.  They don't seem to favor different weather conditions nor do other variables on the farm seem to impact them in different ways.  So, we are down to a straight up yield battle in 2013.  Taste, quality and type are all similar.  CSA members be aware, we may ask you to taste test these beauties for us and take a vote in September.
Posted by Rob Faux at 9:52 PM

Email ThisBlogThis!Share to TwitterShare to FacebookShare to Pinterest
Labels: Just Veg-ing Out