Once upon a time, there were two people who worked on a vegetable farm in Iowa.  They lived on the farm with five cats, chickens, turkeys, ducks and many earthworms.  One day, during the Winter, when it was cold and the crops were not growing, the farmers went on an adventure to a place far away from the farm.

They started walking down a steep road.  A helpful person had suggested a hike to a beautiful waterfall.  She said it was only a couple of miles, so the farmers decided that it might be a nice walk.

Along the way, the farmers met some trees.  There was a cluster of evergreen trees that were very, very tall.  Both farmers were happy to see them and they stood underneath them for awhile.  They thanked the trees for the shade.  The trees were pleased to be helpful and as the farmers continued down the road, they whispered something to them.  But, the farmers did not understand tree language, so they did not know what the trees were saying.

As the farmers continued to walk, they went under a canopy of lovely trees.  They stopped to admire these trees and took a picture.  They told these trees that they appreciated their beauty.  Of course, the trees were flattered and decided that the farmers were nice.  They spoke to the farmers more loudly than the evergreens.  But, the farmers still did not know tree language and they walked on.

There was a sign to go on a short trial spur called the "Cliff Trial."  They decided to check it out and found a beautiful overlook that had an old guardrail to show travelers where it was safe to stand.  The farmers were pleased to be there and enjoyed the view.

As they stood at the overlook, they heard something.

They heard it over and over again and finally found what was talking to them on the cliff opposite the cliff they were on.

There were goats that appeared to be walking on the sheer cliff face.  The farmers knew a little goat and thought the goats were saying something like this:

"Silly farmers, you are not goats.  Stay on your side of the fence."

They said something else about waterfalls, but the farmers didn't quite understand what they were saying, so they went back to the main trail and walked on.

Then, they came to a place where there was no guardrail, there was no fence and they were certain they were at the edge of the world.  A sign that was written in a language the farmers understood said something about sharp dropoffs, loose rock, danger, injury and/or death.  This made the farmers wonder a little bit about their choice for a nice 'walk.'

One farmer looked at the other and realized what the trees had been saying to them.  They were trying to warn the farmers that the trail to the waterfall could be a little scary for farmers who are used to flat land.

As the farmers stood at the edge of the cliff, they were not sure they should go on.  A little bird hopped onto a rock and said,
"Cheeeep.  Tweet, chip chip chip."
Since the farmers had birds on their farm, they could understand some of what the little bird said.  It said,
"You're ok, if you slip, you just open your wings and fly."

The farmers did not find this at all helpful.


The farmers looked around and saw interesting rock formations on a cliff across from them.  But, they weren't sure where the waterfall was that the trail signs had mentioned.  They were ready to turn back, but then the bird pointed them in the correct direction.

"Go off the edge of the earth," said the bird.


The farmers did not want to go off the edge of the earth.  But, they crept down the trail carefully, ready to turn around if they found wings were required to continue.  Eventually, they found a trail that was not nearly so close to the edge and they followed it.

They climbed down a steep trail and over a small stream.  There they found a beautiful pool with a waterfall feeding the pool. 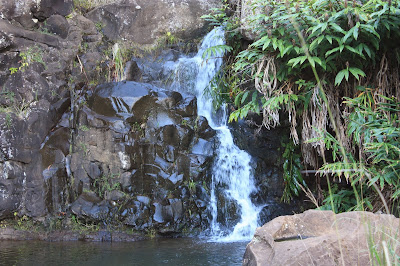 They climbed over some wood and got closer to the waterfall.  They were tired and they were trying NOT to think about the return trip that went by the edge of the world.

After catching a second wind, the farmers climbed back up the trail.  And they started to realize exactly how sharp the drop-off was.

The bird was not there, but they met a little tree that was perched on the edge of the world.  The farmers told it that they were amazed at its bravery and its tenacity.  The tree said something to the farmers, but they still did not understand tree language.  But, they got the feeling that the tree was happy to see them.

The farmers made it back to their cabin and were very tired.  They had some dinner and a good night's sleep.  Then, the next day, they went to another place that had very good fences between them and the steep drop at the edge of the world.  They looked in the distance and they found the waterfall and the trail they had walked to get to it.

It was at this point, the farmers decided that they should learn tree language.  But, they still were glad they took the trip to the edge of the world and the waterfall they found there.

(ed note: the Waipo'o Falls is listed as an 800' waterfall.  We're not certain whether this includes the short waterfall you see in the second waterfall picture.  We are certain it does not include the first since it is in from the cliff face some distance.  If you look at the last picture closely, you can see there are two stages to the waterfall at the right.  We were at the top of the uppermost stage.)
Posted by Rob Faux at 2:07 PM