GFF has been in the news lately and we've had a few people ask if there were links to some of the other instances.  So, we thought we'd do our best to locate and place the links here for the interested.

On December 14, the Waterloo Courier ran a very good story on our farm in response to our entry in the Dream Big, Grow Here contest.  We've received numerous positive comments and we'd like to applaud Jim Offner and Matthew Putney (photos) for their efforts.  Well done. 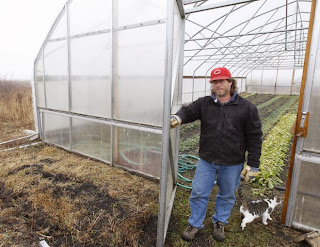 There was also a concise story that ran after the 'pitch off' that explains pretty well what the Dream Big, Grow Here contest is and how it works.  And, the Waverly paper also put an item out there after this contest.

Earlier this past year, Growing Magazine published an article by Tamara Scully that featured our SARE grant funded work on intercropping.  We've continued our efforts along these lines with a new SARE grant that continues into 2014 and hope for a more moderate start to the season so we can get results that reach a greater level of completion.

Somehow, we missed this 2011 article regarding the Waverly Community Gardens.  It is not specifically about our farm, but it does include some of our role in working to get those gardens going that year.  We're pleased to say that they seem to be producing a good amount of food for those who need it in the Cedar Valley Speaking of 2011, we were also part of an enjoyable story  along with our Gang of Four farm members by Josh Dolezal (photos by Mark Tade) in the Iowan.  The story, in a way, was a nice way to reflect on what our each of our farms do and how we are interconnected.

A couple of years ago, we were involved in a group discussion that was filmed for the HBO Weight of the Nation series.  While we only show up in one of the short films ever so briefly, it was still a valuable experience for us to discuss the difficulties of farming with our peers.  And, the resulting film, we think, illustrates the problem and provides some reasonable ideas to being encouraging societal change.

And, our high tunnel build field day in 2010 resulted in a few articles here and there.  Among them is this nice piece by Jean Caspers-Simmet in AgriNews.  And a nice picture post in the Practical Farmers of Iowa blog showed up the same month.  And we even appear in an article in the Waterloo-Courier as far back as 2008.  And, we even show up in the Wartburg College Magazine in an article by Karris Golden in 2007. 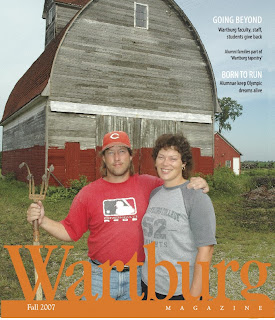 It is always instructional to re read these articles.  We see some things that might have changed in what we believe, but usually it is our ability to concisely explain our vision to others that has changed the most.  Our approach to describing what we do and our choices in how we represent our farm have evolved in part because these articles can show us where we may not be explaining ourselves as well as we should.  There is nothing like reading someone else's interpretation of what you said to encourage you to work on how you say things.

Regardless of this, it is both flattering and humbling to think that our story is worthy of attention. It is a reminder that what we do and how we do it is important and therefore, it is necessary that we continue to do what we do to the best of our abilities.

Here's to our prior work on the farm and to our future efforts!
Posted by Rob Faux at 1:54 PM