The farmers return to the farm after a much needed break.  Our thanks to Tammy's parents for the opportunity to gather with family on the island of Kauai.  It was a rare opportunity that we would not likely have provided for ourselves and we are grateful.

We thought we'd share some of the pictures of our travels.  So, here they are!  We're pleased to have had the chance to be in a position to see these things in person.

We spent some nights in a cabin in the Koke'e State Park.  As a result, it was easy for us to revisit various sites depending on the time of day, amount of sunshine, etc.  The Kalalau Lookout and Pu'u o kila Lookout both overlook the Kalalau Valley.   We found that there were very few people there at both ends of the day, which we found attractive.
The Kalalau Valley is often covered with clouds or fog, so getting some of the views we were able to have was a bonus.  But, we're pretty sure a big part of it was our being around the area more than most.  Many who visit the island run from location to location and get one shot at the viewpoint.

We were treated to a fantastic sunset from the same lookout.  But, you have to face West (yes, yes, that IS where the sun goes down at night).  The 'normal' overlook faces North.  But, we did get to see the sun sink into the sea.  Now we know where it goes at the end of the day.  Something has to keep the waters warm you know.

One of the most amazing things about Kauai is the colors.  We enjoyed the different pallet the sunset provided.  And, it was an odd feeling to be looking out over the ocean and feel like you were looking DOWN at the clouds.

We were also fortunate to take a good hike on the Napali Coast (this time from the Northeast side - Koke'e is Northwest).   Unlike the trails in Koke'e, there was much more rock - making it ideal for turning ankles.  Happily we avoided that.  Koke'e trails had more roots and stumps in the way.

We took the two mile hike down to the beach from the entry point.  This beach can only be reached by hiking or, we suppose, helicopter.  We were surprised by how many people took this hike.  It was especially strange since there were relatively few on some of the Koke'e hikes.

Of course, there are waterfalls on the island.  And, you could read our prior post Fall(s) in Winter if you want to read about the farmers trip to Waipo'o Falls.  Some of these falls have easier viewpoints, such as the one shown below. 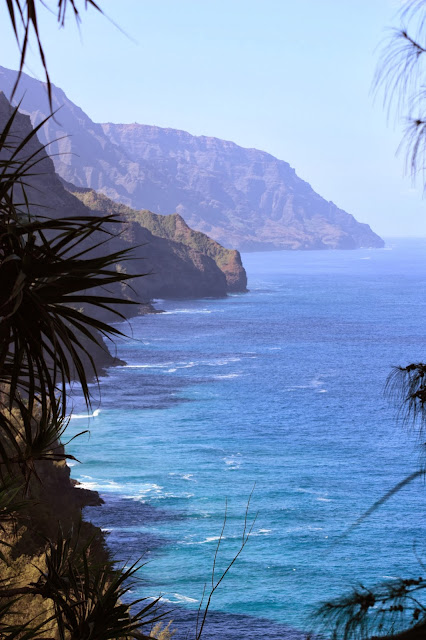 As we mentioned, it wasn't always sunny up at Koke'e State Park.  One of our morning treks featured fog/clouds.  But, it also provided some interesting chances a pictures.  That, and we enjoyed watching things clear as the sun came up in the morning.

We did travel down to where the Waimea River emptied into the ocean.  Just inland a little way was a neat swinging bridge.  Of course, we had to walk on it.  That' why it is there, right?

Speaking of Waimea and the Waimea Canyon, we spent a fair amount of time in that area.  It is aptly nicknamed the 'Grand Canyon of the Pacific.'  It's on the dry side of the island and the colors are spectacular here as well.  We visited the overlooks more than once and took some interesting hikes.

And, we made sure to take our time at each viewpoint.  I suppose you could say we were looking for interesting photo opportunities and you would be partially correct.  We enjoyed having the camera along, of course.  But, we like to use it to help us enjoy more of what we are seeing.  We witnessed numerous people who barreled in to a spot, snapped quick pictures and zipped out.  Our feeling is that they could have just gotten a calendar for a couple of dollars and got the same thing out of their time.  On the other hand, the majority of the people who came to view Waimea Canyon were taken aback by its beauty.  Perhaps they couldn't stay as long as we were able, but at least they had some appreciation for what they were seeing.

Since we farm, we were also intrigued by the taro fields on Kauai.  Taro is a traditionally grown crop that actually also serves an important role for avian habitat on the island.  Since this is the case, the state actually encourages taro farming.  It's just one case where you actually can work with nature some and come to an understanding.

We visited as much of the island as we were able and took pictures when it seemed like it was a good idea.  Typically, if you go to Spouting Horn, you take pictures of the spout.  We did that, of course, but the best picture from here is below.

We also went to the Western part of the island and visited Polihale State Park (also known as Barking Sands).

It is our understanding that it can get pretty windy there, but it was reasonably calm while we were there.  To get there, you have to drive on a road that is not maintained, so we didn't go much faster than 15 miles an hour for a stretch.  But, we enjoyed the wave watching and the deep sands there.  If we had it to do over again, we might budget more time to experience the area better.
Ok, we realize that this post is getting long.  But, we wanted to share some of our pictures with everyone.  We aren't doing this to show off, but to illustrate how much we appreciated the chance to do this.  It may seem as if we were hyper and ran everywhere, but those who know us understand that we like to take our time at places.

Kauai was full of deep, rich colors.  Sometimes we took pictures like the one above to capture them as best as we could.  And, we had opportunities to take a few flower pictures as well. 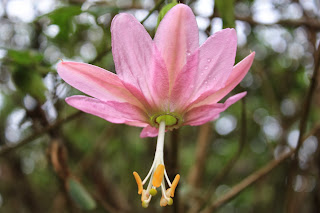 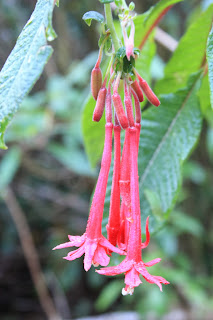 We took the next picture near the swinging bridge.  In many ways, it reminded me of an early Summer picture in the Midwest.  Until you look more carefully at the plants and realize you won't see them around here.

And, just to show you that we also visited the East side of the island, we also did a little wave watching at Lydgate park near Kapa'a.
We hope you enjoyed our travelog.  It was enjoyable to look at some of the pictures and think about our experiences.  We may (or may not) put more on our blog.  If you want to see more, we will share a bit more.  But, we also realize that the pictures mean more when you have the experience that goes along with them.
Posted by Rob Faux at 9:09 AM