23 Reasons to Join This Year's CSA Farm Share with GFF!

Contrary to the word on the street, our CSA farm share program is not full for the season.  We can take more reservations.  In fact, we'd like to hear from you now so we don't have to work so hard on the billing cycle.

What do I mean by that?  Well, if I go through the billing process with the CSA 60% full, that means I have to spend extra time on each person that joins after that.  It is much more efficient for me if I wait until we're closer to full so I can make the whole process faster for me!

So... here we go!  Reasons to join our CSA farm share program in COLOR!  Technicolor if you would prefer!

If you haven't tried a Boothby's Blonde cucumber yet, then you really should.  They are quite mild and have a tender skin that removes the need to do any peeling.  And, if you like the texture of spinach, Amish Deer Tongue lettuce is one of the nine varieties of lettuce that we grow.  Deer Tongue has a sturdier texture that is reminiscent of spinach and has a very nice taste.

We realize that not all greens are for everybody, but we grow enough variety that most people can find a green or combination of greens that works for them.  Rainbow Chard is one such item we grow on the farm and provide as a choice, often with kale as the other option.  And despite all of the Upper Midwest jokes about not leaving your car window open or else you will be given zucchini, we happen to grow four to six varieties of zucchini, including Cocazelle, a lovely striped zuke.  We do our best not to overwhelm with one type of veg, but we also try to give you enough to be getting on with... so to speak.

Many people enjoy our CSA simply because they will get to pick from over thirty heirloom tomato varieties once we get into August and September.  German Pink is often a favorite for both the farmers and the members.  Then again, maybe your mouth waters for some green beans?  We know ours does!

We've worked hard to extend the season for popular vegetables, such as broccoli.  Last season we were able to harvest over 600 pounds of broccoli for our CSA share holders.  And, we grow interesting varieties of melons - such as Ha-ogen, a green fleshed melon that has an incredible, different taste that will convert you soon after you figure out what it was that just hit you.

If you didn't believe me that we grow different varieties of things, consider Ice Queen lettuce.  We target varieties that allow us to extend the season.  In the past, we've been able to have lettuce available to our members for as many as 17 of the 20 weeks in a season.  And, we also grow items that might not be as well known to people who grew up in Iowa (like Rob).  Pok Choi normally makes an early and a late appearance during the growing season.

Kohlrabi is becoming much more popular as people figure out how good this is as a snack with a dip of choice.  And, if you are wondering if we only grow 'WEIRD' stuff - here are some Marketmore cucumbers.  Why yes, they do look like normal cucumbers, don't they?

Eggplant not your thing?  Well, maybe you've never had them cut into rings and put in a grilled stir fry or shish-kabobs?  Pintung Long eggplant are perfect for this.  And, we mentioned kale, but did we mention that we grow several varieties of this as well?  For example, Red Russian in the picture above.  We also grow Blue Scotch, Vates and Lacinato.

Some of the things we grow have good years and bad years.  For example, cauliflower is one of those on again/off again types of veg on the farm.  Sometimes this is because we're trying to find varieties that work well for us.  In the case of cauliflower, the varieties we liked were discontinued and we had to work and find new ones.  Amazing is shown above and should do well for us in 2015.  Carrots, on the other hand are difficult for us to grow consistently well for many reasons.  This is why Jeff Sage works with us - he's a wizard with carrots!  As a result, our members have had plenty of carrots for the past four seasons, without fail. 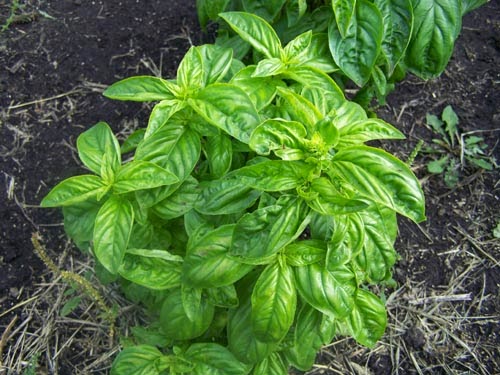 Other vegetables show up every year in some quantity.  Last year the summer squash and basil were a bit less prevalent than in some years because it was a cooler growing season.  Both of these like warmth.  But, we still got a fair amount to our members.  Why?  It's because we have some experience under our belts and have identified many ways to coax a crop even during difficult conditions.

We are not afraid to do research and trials in an effort to find vegetables that grow well AND are liked by people who join our CSA farm share program.  As a rule, if the variety we try doesn't taste good to at least a significant portion of our membership, we don't grow it.  For example, we do grow acorn squash because many people tell us they like them.  We grow the standard green acorn squash, but we also grow Thelma Sanders because we think it has a better texture and taste.  Most people who can get past the idea of a tan colored acorn squash tend to agree with us!  But, we still grow the green ones in case someone is a bit phobic about color differences in their veg.  And, romanesco - talk about odd looking.  But, it sure does taste good.  It has rapidly become a favorite in our house.

We hope we can tempt you to join us in 2015 so you can try our delicious Wapsipinicon Peach tomatoes.  We often have a tray of snack sized tomatoes as a part of your share from late July through September.  We like to say that the person who picks up has the right to eat these before they even get to the car.  The rest of the family is just going to have to help pick the share up if they want some!  Although, we suspect there are many very nice CSA shareholders who do bring these beauties home to the rest of the family.  And, we try to have a watermelon treat for everyone at least once per year.  Of course - you can't expect them to be one type, can you?  It's us!  Variety is the spice of life! 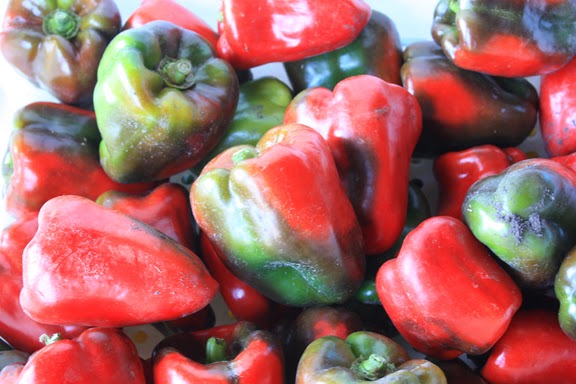 Please consider making us your personal farmers.  Send us an email and reserve a spot today.
Posted by Rob Faux at 5:30 AM