A Reason to Duck

We do raise a number of poultry on the farm and we have featured our chickens and turkeys in blog posts in the past.  And, a quick look at our blog shows that we've even talked duck in the past year!  But, we finally managed to get a few new pictures and figured it was time to share a bit more about our ducks.

The impetus for this blog post is the successful hatching of some ducklings by the Muscovy ducks we overwintered on the farm for just such a purpose.  Both of our Muscovy hens and all three of our Silver Appleyard hens sat on nests for several weeks.  In the end, only one nest resulted in hatchlings.  And, to be honest, we figured we were going to have no ducklings hatched from these nests.  so, it was a pleasant surprise.

Earlier in the season, we made the decision that the ducks weren't going to be able to raise their own this year, so we went ahead and ordered some ducklings to be raised for meat.  We managed to get them moved from the brooder area in the Poultry Pavilion a couple of weekends ago.  The process was a bit traumatic for the ducklings, but they tend to act like everything is traumatic until they reach full size.

We had some difficulty getting them to stay where we wanted them and had a not so memorable morning clearing brush and moving young ducks AGAIN.  But, eventually, the other adult Muscovy decided she was willing to adopt 20 some young ducks with a little help from the Muscovy drake.

Just imagine twenty some odd teenagers moving into your house and looking to you to be their parent.... OY!

But, what about the Silver Appleyards?

Sadly, none of their eggs hatched successfully.  But, that does not mean the grand experiment halts here.  We'll probably keep these guys around another year and see if we can't provide them with a better environment (with more water) to help them out.

Unlike the Muscovys, the Appleyards do quack.  They have decided that Rob needs to be told what to do every so often.  This is especially true if the food is low or the water is dry.  They have been known to line up (about 5 feet away) and outline very clearly in "Quackese" what should be done.  If you look at the picture above, they are starting to get into formation for a 'talking to.'  I suspect this quack session had to do with all of the young ducks now in their pasture.  Sadly for them, this will not change any time soon. 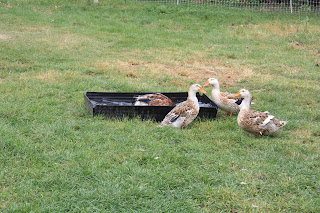 Apparently, this session was more about wanting more water too.  Because they immediately took turns taking a bath in the water right after I got the tub filled.

Well, at least they got results.
Posted by Rob Faux at 5:30 AM