I've actually had a couple of people ask what the mid-season favorites are for the Veg Variety Winners this year.  Obviously, it is way too early to know for sure how things will end up, but there are some obvious winners so far.  On the other hand, we see things like our melon vines dying off and the number of melons is far fewer than expected.  We were so happy with how that field looked too.  It's just the typical "looks can be deceiving" reminder.

But, without further ado - here are some mid-season guesses on veg variety winners. 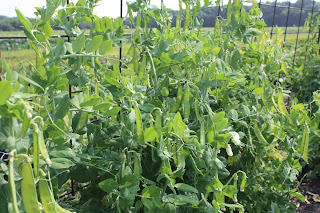 The peas were just amazing this year.  Each of our four varieties (Golden Sweet, Mammoth Melting and Oregon Sugar Pod II) did very will.  Actually, a fifth variety (Cascadia) didn't want to germinate, so all was not perfection.  In all of these cases, the variety classifies as a snow pea.  Overall, we think the best taste belongs to Blizzard and Golden Sweet.  But, Mammoth and Oregon have better substance for freezing and stir fry.  As far as production goes, Mammoth (.94 lbs/row foot) eked them all out with Golden Sweet having the lowest yield in pounds per row foot.  But, since Blizzard was close at .86 pounds per row foot and they had the better taste of the two, Blizzard wins.

Oh, and picking Blizzard is so darned easy and fun!  I am sure the crew would agree with this pick as the overall winner for the peas.  But, the peas were so good this year, don't be surprised is more than one variety makes the list for the year. 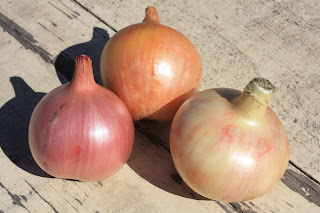 Ailsa Craig Exhibition Sweet Onion
We're just starting to pull these in.  This is a variety that we grow every year because the taste is so good.  But, production can be a bit of a roller coaster.  Last year, we pulled in a respectable group of Ailsa's, but it wasn't overwhelming.  This year, I think everyone will be impressed with the quality and numbers.  We've only pulled in the high tunnel Ailsa's, and they are small compared to the field onions.  White Wing and Redwing are also doing quite well for onions this season, with the nod likely going to Redwing if one of them is going to beat Ailsa out.

Bloomsdale Spinach
We haven't had spinach in a while, but I can still pull out the memory of the wonderful winter batch we got to enjoy in March through May.  And, we still have the Fall and early Winter for Bloomsdale to wow us some more.  Bloomsdale has made the list multiple times, but it actually may get some competition this year as we're trying two more varieties (Giant Winter and Butterflay).

Minnesota Midget melon
We grow Minnesota Midget exclusively in the high tunnel and it seems to really like that environment.  By trellising these vines, we avoid losing alot of space to them as well.  Thus far, our 60 foot row in the old high tunnel has yielded 120 melons and the taste has been great.  The only downside is the fact that we just can't get it to produce enough for everyone in each distribution.  But, next year, the second high tunnel will be going and we shouldn't have that problem anymore! 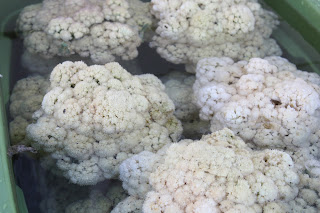 Cauliflower?
We've been pretty happy with the cauliflower in the first succession, but we really need more data from the next successions to make a choice.  Goodman, Amazing and Snow Crown all did well and the taste has been excellent.  If the Fall batch does as well, one of these will make the list.

Dragon Carrot
Our stand of carrots in the field and the high tunnel looked pretty good for quite some time.  We will admit that the harvest isn't likely to turn out to be as great as we hoped.  But, we also set our hopes pretty high based on the looks of the greenery.  Thus far, Dragon has been out-performing St Valery's and the consistency has been much better.  Again, it will be a few weeks before they are all out of the ground, so we'll let you know! 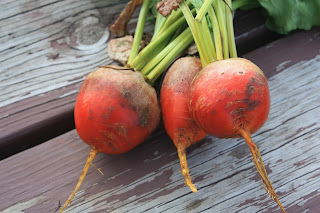 Touchstone Gold Beet
The high tunnel batch was tremendous and it looks like the Fall field planting is germinating.  If these do half as well as the high tunnel group, we have a likely entry in the top 10.  The consistency, decent size and excellent taste and texture make this a good one to watch.  The dark horse here is the Fall planting of Chioggia beets.  They are germinating even better than the Golds!

Of course, there are other suspects for this lineup, but some of them admittedly have a tougher road to follow.  For example, it takes alot for our beans to have an exceptional year.  They are looking good thus far, but have to continue to be considered.  I guess you're all just going to have to wait until we publish our top ten in November/December!
Posted by Rob Faux at 5:30 AM

Email ThisBlogThis!Share to TwitterShare to FacebookShare to Pinterest
Labels: Just Veg-ing Out