There is so much to put in a farm report, that we sometimes get paralyzed and end up reporting nothing.  So, instead of allowing that to happen, we've just uploaded a few pictures and they will dictate where the report will go.

The Old High Tunnel is Looking Good
We've been told that we need to come up with names for our high tunnel buildings.  Maybe this Winter.  In any event, the old building has some very nice looking crops in it right now.  We harvested half of the golden beets and a portion of the carrots for our Thursday CSA and will harvest more for this coming Tuesday.  The quality is pretty good, we think.  The onions are starting to mature and there are some tomatoes beginning to ripen (mostly scouts, the bulk still has a while before it goes).  We've harvested bell peppers once and the green beans multiple times.

Trying to Get on Top of the Weeding
We will be without workers a bit sooner this year than we are many other years.  As a result, we are pushing extremely hard to get on top of the weeding.  The problem, of course, is that the weeds and weather are NOT on board with this plan.  We take pictures like the one above the day after a weeding excursion, but we just don't have the gumption to take another picture a week later.  We ran this field just prior to the rains that encouraged much more weed growth.  That figures.  But, we'll keep plugging away at it.

No More Teen Paranormal Romance Novels on THIS Farm
We mentioned last year that we felt like most of the young adult novels nowadays have vampires in them.  We're not entirely sure why that is, but we do know that if garlic repels vampires, we won't have much of a problem with them here.
While the garlic is not huge this year, it is consistent in size and quality.  We were able to pull over 3300 head of garlic (a record for our farm) and they are now curing.  Hopefully, we can manage to sell some of the garlic for seed to Seed Savers again this year. 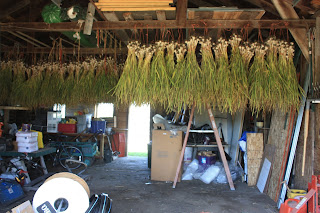 The crew seemed to enjoy the task since it had a definite start and end.  I think they were pretty proud of the fact that the harvest and the hanging up of the garlic was concluded in two days.

Always Looks Best After a Weeding
Cooler weather has resulted in some slower development for some of our crops, such as the peppers.  But, they look good enough and they'll produce at some level, if not a record pace.
We spent half of Friday cleaning up the pepper, bean, okra, eggplant field and the results are very pleasing.
Other crops are a bit more difficult to weed right now. We hit the pumpkins about right for weeding scheduling since they were aggressively vining out right after our last weeding.  The winter squash, on the other hand need to be weeded, but we'll have to work around vines.  Ugh.  Feel free to contact us if you'd like to help with that project!
Posted by Rob Faux at 5:30 AM