The New High Tunnel at Work

Back in June of this year, we put up our second high tunnel.  If you would like to see more about that process, check out this blog post.  It even includes a neat link for a time lapse video of the actual build.

We were finally able to match up a calm day with our full complement of workers AND no CSA distribution on that day where we could move the high tunnel over the plants we put in the ground.  The first time we moved our other high tunnel was a bit rough, so we wanted to be prepared to discover some issues as we went.

We built the high tunnel in the West position in part because it was closer to a good staging area for the build.  The East position is simply further away from any resources we might have wanted to use.  And, we had less access to grassy areas that we could work in during rain.  As it was, we had to work in plenty of mud - so it was nice to have options. 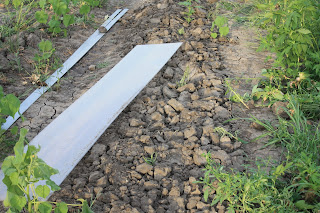 Unfortunately, the soil in the West position was pretty close to unworkable.  We attribute this to two problems.  First - our excavation work didn't happen until this Spring.  And, the excavation resulted in pulling up some clay that got mixed into the top soil.  Second - we had rain during the high tunnel build, this helped to create a very solid crust in the top six to eight inches of soil.

If you look at the picture at the right, you can see an area that Rob managed to broadfork.  The best he came up with were some BIG chunks of dirt.  If that picture doesn't work, try the next one.  It gives a little more perspective so you can see exactly how bit some of those chunks really are!


In any event, the meant we had to give up on the idea of planting in this position of the high tunnel this year.  So, after a good bit of work, we were able to prepare the soil in the East position and get it planted.  You can read about this towards the bottom of this blog post.


We managed to get the building moved in a little over half a day.  This is longer than it takes to move the older building.  But, the first move is always the most difficult.  As you can see from above, the only weed that was really being successful inside the high tunnel in the West position is button weed.  That alone should tell us something.

The plants currently in this high tunnel position are there for us to attempt to extend some summer crops late into the Fall months.  We already see some success with the bean row getting ready to flower.  The jury is out on the peppers and tomatoes.  The melons should be ok and the sweet potatoes on the far end are an experiment.  We'll see.

There are couple of major differences between the old building and the new building.  The new building is larger.  But, the odd thing about that is the fact that I don't see this building as being so big.  In fact, I get surprised by how small the other building is.  I'm not sure what that says about me.  The other major difference is the presence of  a water supply inside the building.  It's nice, but not necessary this time of year.  But, once we get into November, it's value will increase significantly.

Now, we need to spend some time addressing the soil quality in the West position.  We've got a plan.  Now we've got to execute it!
Posted by Rob Faux at 5:30 AM