Spring is the Time for New and Newer

April has actually been a very difficult month for both of us on the farm.  Tammy goes through finals week for Winter term and then needs to prep for and run an intense May-term course that starts in - you guessed it - April.  Organic Certification paperwork and taxes are both due mid-month.  Plants are getting started, the farm needs to get "unpacked" from storage and, of course, our Winter bodies are complaining about the new level of alternating activity and inactivity they are receiving.

If you do not understand that last statement, here is an example.  Tammy and Rob both spent a whole day on intensive paperwork goals like grading finals for Tammy and finishing organic certification paperwork for Rob.  The next day, they ran around like crazy people doing active work outside all day long.  Zero to one hundred miles an hour with just a single night in between them.

Sadly, all of this running around either mentally or physically (and sometimes both at once) forces us to make a strong effort to actually look at and enjoy some Spring things - otherwise, we would miss them altogether.  The hard part is actually looking at the Spring things and not think about the work they represent.  Uh oh.

April is the beginning of the baby boom on the farm.  It starts with hen chicks, who are now actually ready to get moved from their starting point in a metal bin to one of our trailers (that happened on Tuesday this week).  Nights are still a little bit chilly, but we'll have a back up in case we think it will get too cold.  The first batch of broilers are now one week old and are still yellow puff balls with a hint of wing feathers.  They live in a small horse trailer that we run an extension cord to for heat lamps.  But, with the wide range of temperatures, we have to be ready to open up doors and windows for them during the day and shut everything up tight at night. 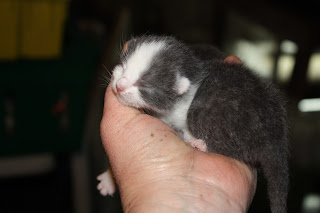 Then, there was the addition of Soup's kittens (which sounds a little bit like Soup Kitchen - which is an entirely different thing).  We need to put a newer picture of them out there for everyone since their eyes are now open and the ears are a bit bigger.  They, of course, require some of our attention each day so they can get used to human touch and Soup wants her skritches* as well.  This leads to some major jealously issues from ALL of the other cats who all believe they are also cute and deserving of affection.  Mrranda "helped" me pull some weeds today, Sandman "helped" by pulling on the strings of my hoodie, Bree "helped" me find the brush so she could be brushed and HobNob did something she knows she should not do and jumped onto the kitchen counter for attention.  Uh huh.  Ok, so HobNob didn't help.  No, wait, she "helped" me try to type some quick email replies by sitting on my hands while I was trying to type.  There we go.

*skritches - For those who are/were Peanuts fans, Snoopy always liked to be 'skritched' not 'scratched.'  Tammy and I have (for as long as we can remember) given the critters in our lives 'skritches.'  After all, 'scratching' seems to imply injury and we don't want that, do we?

And, Flowers Are Good Too

We miss the flowers during the Winter months and we get to see them again in the Spring.  There are two things that is difficult about this.  First, many Spring days are very windy out on the farm.  As a result, the flowers can get beat up pretty quickly.  Second, the flowers are begging to be observed and praised for their beauty.  But, when you are zipping from task to task on the farm, the flowers can start to think that you are down-right rude.

In an effort to placate them, I brought out the camera a few days ago and tried to give the flowers my undivided attention for all of five minutes until it started raining pretty hard.  Oh well.  I guess I'd better give it another try sometimes soon.

One of my favorite flowers of Spring is the Bleeding Heart.  It's not particularly showy in that the flowers are actually pretty small. But, they can have a delicate look to them that belies their toughness.  I suspect that I have a soft spot for Bleeding Hearts because we had a big, old, traditional Bleeding Heart near the house where I grew up.  I remember spending several sessions just admiring that plant.

The Virginia Bluebell (at left) is a flower I really didn't see much of (or maybe I just didn't recognize it) until we moved to the area.  Then, I noticed a yard that had a sea of blue flowers and I had to figure out what they were.  It turns out they were bluebells and they appear to like this part of Iowa just fine thank you.  We don't exactly have a lawn full of them, but we have our fair share and we're quite pleased to see them blooming in April and early May.   It is actually the kind of flower that I wouldn't mind having a really good sized area with them around just for the Spring bloom.


Another early bloomer is the Pasque flower.  We have one of these perennials that has been with us for many years and it continues to increase.  I don't think we've ever seen this thing with quite so many blooms on it as it has this year.  The younger plants did fine as well, but paled in comparison.

This flower is supposed to bloom at Easter - but I think it was wise in passing on showing up this time around.  Easter was pretty darned early!

And, then, our farm is looks like a field of dandelions right about now.  I actually think it is sad that we have demonized the dandelion - they are actually quite pretty.  Tammy even found one with abnormally large flowers and she found the light fragrance to be quite pleasing.  Dandelions have those wonderful tap roots that bring up micronutrients for other plants and loosen up the soil.  And, frankly, they kill pretty easy when we till up the soil for planting.  Give me a field of dandelions any day over the Canadian Thistle that seems to be having a good Spring as well.