The weather and farming.  Farming and the weather.  Every year there is something about the weather that provides a challenge to the farmers and this year the weather issue of choice is the Winter that would NOT let Spring move into the apartment.
We had actually seen/heard some robins and kildeer on the farm just prior to the bigger snow on March 24/25.  We, of course, apologized to them but figured "hey, it's March.  This sort of thing happens in March."

The April 3 snow wasn't a huge surprise.  There are supposed to be three snows on the robin's tail anyway.  The bigger issue was the temperatures.  What follows below is the April 2018 weather for Waterloo, Iowa.  In Tripoli, we were cooler than these numbers and had a bit more snow as well.  For example, you may note the "rainfall" amount on April 18.  Then, view one of the later pictures. 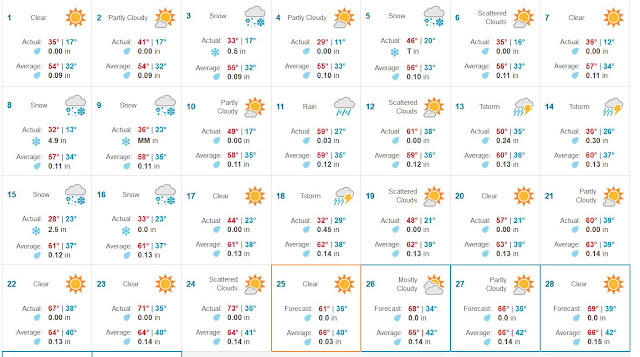 In combination with the much lower than normal temperatures in early April, we didn't have much for sunshine.  The daily summaries shown above don't make it look like it, but we did not have many really sunny days to heat up our high tunnels.  The net result?  Nothing really grew.  The plants lived.  But, that's about it.


Temperatures actually did get warm enough to melt the April 3 snow.  That, and, it really wasn't all that deep.  There was still some snow on the north side of buildings, bush lines and the like, but nothing much.  So, Mother Nature gave us another blanket on the 8th of April.  We had also had a light dusting between the 3rd and 8th, but it wasn't picture worthy. By the time we got another snow on the 15th, we just said, "Bleah," and didn't reach for the camera at all.  After all, that one wasn't much of a snow anyway.

Tammy had a great deal to do during the end of the semester at Wartburg and there was a good deal to do on the farm that didn't have to do with working outdoors.  So, we both stayed busy to avoid letting the weather get us upset.

Sure, the weather was starting to impact our growing season.  Things in the high tunnels were falling further and further behind.  We had trays of plants stacked up in locations that they shouldn't be because we had to keep them warm enough.  Other trays were not getting seeded because there wasn't a place to put them.  Blah blah blah.  Stuff stuff stuff.

But, we're used to slower starts on the farm than we usually want simply because of our location and the types of soils we have.  We rarely come out of the gate on this farm quickly.  But, we're usually quick enough.  This year, we're just like everyone else in our region - quite a ways behind where we normally are.

Once again.  The snow was pretty.  But, now we were getting just a tad bit miffed. 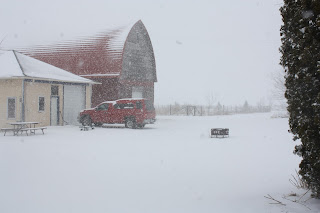 Probably the real highlight of this snow was how wonderfully packable it was.  Normally, I would have been spoiling for a good snowball fight.  But, with no one to throw snowballs at (Tammy knows exactly how to avoid becoming a target), Rob was left to figure out how to dig the snow away from the sides of the high tunnels.

All of that wet stuff that landed on the high tunnels ends up sliding down the arched roof.  Now we had 3 to 3 1/2 feed of heavy snow leaning against the roll up sides of these buildings AND out came the sun and the warmer weather!  If you don't want your crops to bolt inside the building, you've got to get them open!  The shovel was running too much risk of tearing the plastic sides and the bucket on the tractor was certainly not an option.

Anyone for digging out with your hands?  No?  Oh, that's why I did it myself.
I think we're ready for Spring now.
Posted by Rob Faux at 10:42 AM