When Your Calendar's a Day Late

Welcome to the month of April.  This year, the month sneaks up on us by hiding behind a combination of an early Easter and cold weather.  We thought we would take the time to thrill you with various news of the farm in this post - since it has been a while since we posted!

New Approach to Fencing - Living in a Gated Community?
The biggest issue with fences on the farm is that once you put a fence in, it doesn't move easily.  Those of you who know our farm will realize that one solution has been to use portable electric netting to surround areas of pasture where our chickens reside.  But, we'd like to use fencing to prevent deer from getting to produce and the turkeys are really not as deterred by the electric fence as they are by something sturdier. 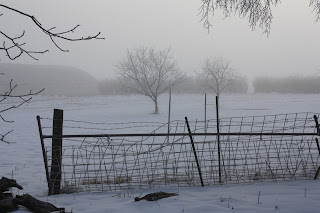 We've decided we may have the solution right here on the farm in the form of several old gates.  We figure if we plan it all just right, we can have a flexible pasture by simply making each "fence line" out of a series of gates.  When they are oriented one way, they create one set of fields.  If you "open" them up, you get a different configuration of fields.  We could get really fancy and even have stakes set up so we could run a diagonally situated field!  Now, if we could only find a way to get a whole bunch of stakes inexpensively.

Virtual Skritching Becomes the Rage at GFF
For those of you who might be fans of Snoopy - or if you've known us for some time - we bring you the 'skritch.'  Some pets like to be 'scratched,' but ours prefer to be skritched.  For those moments at the end of the day when you see a cat that needs a little bit of a skritch, we bring you the virtual skritch.  See below.

Dyed Water to Get Colored Eggs
Our farm participates in many research projects.  Some of them are of our own making, and this year is no exception.  We have noticed that the composition of the eggs laid by our hens can change depending on what the birds ingest.  For example, you might notice that the eggs become a richer yellow as they spend more outdoor time on green pastures and they fade a bit during the Winter.  In fact, we've noticed a definite orange tinge to the yolks when we feed them squash.  If you need more evidence, let me point something out.  What happens when you eat red beets?  I rest my case.

After the recent egg sales for Easter, we realized we may have missed the boat on an opportunity here.  Therefore, this Summer, we will segregate a small batch of chickens and put colored dye into their water.  Can you imagine how convenient it would be for all of you to celebrate Easter with pre-dyed eggs?   Our next step will be to figure out how to pre-hardboil the eggs.  We're not sure the chickens are going to enjoy that experiment as much.

Who Knew - Stakes are like Potatoes?
The Genuine Faux Farm is always looking for ways to develop new products or reduce supply expenses and we believe we may have found one such opportunity.  We've planted various stakes over the years and have never seen any of them produce fruit successfully.  Well, it turns out that they grow more like potatoes and they put their fruit BELOW the ground.  Now we know - we need to mark the planting locations so we can dig for the harvest.  Please take note - new stakes have a skin that isn't tough enough for standard use.  Stakes are better when they reach full maturity.

Farmers Taking Disco Classes
Both Tammy and Rob like to think of themselves as life-long learners.  Every Winter, we try to learn something new.

Star Wars has it Right
Wheels?  Who needs them?  We have decided that wheels are over-rated and we're looking at new ways to move things about the farm.  Rob is working on a 'hover-craft' of sorts and has already identified the payload - the old flair box shown in the picture below:
Thus far, efforts have met with mixed (at best) success.  The first effort with a series of shop-vacs pumping air out the bottom resulted in some lift, but there was no room left for anything else because it took too many vacuums to get it to go.  For all of you I borrowed shop vacs from - I'll get back to you (see below).

The second effort seemed to work better.  I put the shop vacs on another wheeled cart and then had the vacuums suspend this box over the cart.  It looked neat until I realized I was still relying on wheels.  In disgust, I cut off the power to the shop vacs.  So.... about those shop vacs I borrowed.

My next effort was an attempt to get electromagnetic suspension to work.  Using maglev suspension methods that are used for some trains as a model, it seemed like I could be in business.  The parts only cost a little bit.  Well, ok, let's just say I owe more than I'll ever earn in my lifetime.  The whole project hit a snag when I realized I needed to lay rails everywhere I wanted to go on the farm to make this thing work.  Since I didn't want it to be limited to only certain areas, I decided to lay track "on the fly."  As the thing moved forward, I picked up the rails that were behind it and moved them to the front.  It's not hard to move them with the loader on the tractor.  Did you spot the problem with this solution?

Yep, the chickens kept getting in the way.

Speaking of chickens, my latest idea is to strap a whole bunch of chickens to the bottom of this thing and get them to fly.  What could possibly go wrong?

Genuine Faux Farm Kickstopper Campaign - FAILURE
Last year's Kickstopper campaign that was created in an effort to STOP ROB FROM POSTING these things that always seem to appear around April 1.  It was an abysmal failure.  You only have yourselves to blame for this post.  If you'd only supported the Kickstopper Campaign when you had a chance, you would have gone on with your lives not thinking about chickens, beets and disco-dancing farmers.

Would you like us to start another Kickstopper Campaign?  We're willing to give it a go.