There is an old saying that there are always "three snows on the robin's tail."  Well, we're pretty certain that the number used in that saying must be a statistical average rather than a law of nature.  I'm watching snow number four (or is it five?) as I type this.

I can tell you that since we started farming, it has seemed to hold fairly close to true that the robins arrive and we get a few snowfalls.  Usually at least one of them is only a dusting that barely qualifies as the third snow fall.  But, when you are getting anxious for Spring, you'll count a single snowflake as an official 'snowfall' if only to get past the third "robin's tail snow." 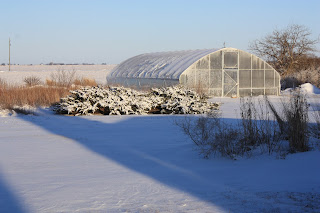 Funny thing about Mother Nature, she doesn't really care what we think.  And, she certainly doesn't worry about staying true to an old saw about robins, snowfalls and the timing of spring.  Nonetheless, I still submit to you that, at our farm, the saying is accurate - on average.  After all, it was just 2013 when we got this snow in early May.  According to my notes, I had counted three snowfalls after the arrival of our first robins on the farm.  But, one was, admittedly, one of those snowfalls that didn't even give us a dusting of snow.  I should have known that there was still one more coming.  Darned robin and its tail...

For those who might enjoy it - here is a link to a time elapse snow cover of North American for March through May of 2013.

The good news about snow?  Well, it looks pretty - even when you don't want it.  And it blows around alot.

Ok, maybe the 'blows around alot' part isn't seen as a positive by most people.  I think we're all over-reacting a bit to the snow this April because we (at least in the area around our farm) haven't gotten all that much snow this year.  Here is the snow cover animation for November 1 to April 1 of the past winter.

The animation sure makes it seem like we got much more snow than we recall getting.  But, the truth is one inch of snow IS snow cover.  For us, we didn't have to do too much "path-making" in snow to get to the chickens until March this year.
It all evens out in the end, depending on what sort of balance you are using.  For now, I am going to go outside and console the robins.

Their tails are getting a little tired carrying all of that snow on them.
Posted by Rob Faux at 6:00 AM