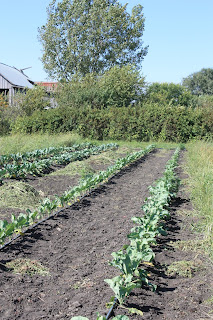 The Perils of Paucity
Nothing like a very difficult month to make a person eat their own words.  Our opening title for the September newsletter was "The Perils of Plenty."  And, we did, in fact, seem to have plenty of produce.  Certainly, there were some things that weren't going the way we wanted, but really didn't expect a wetter than normal August and its trials to lead to a record setting amount of rain in September.  To top it off, it looks like October is going to start with a front parked over the northern half of Iowa and the rain chances continue.

The photo at right shows one of the few times in September that we had a nice sunny day AND the fields were workable.  Caleb and I took some of that time to weed and clean up around the late planting of broccoli, cauliflower and romanesco.  There is still a chance these crops will produce for us and we have done (and will do) all that we can to help them out.

There were some significant crop failures as a result of the heavy rains and standing water on the farm.  The outside tomato crops declined rapidly and looked like they usually do in late October, not mid-September.  The newer plantings of turnips, spinach, beets, radish, mustard greens (etc) essentially drowned.  A quick look yesterday showed maybe a half dozen radish and a couple dozen beet plants still alive.  That's it.  To give you perspective, a planting of radish usually consists of 1000 plants.  The crash in production will be putting a dent in our anticipated end of year farm income.  This year may well be the worst we've had since 2010 for struggles on the farm.  For those who do not remember or did not know, that was the year we came within a whisker of calling an end to the Genuine Faux Farm.

The hardest part of all of this is fighting through difficult conditions and remaining motivated to get things done at the farm.  It's an attitude thing - and we know it.  So, per the norm, we cope with difficulties by accentuating the positive.  We are better prepared, have better tools and our experience certainly counts for something.  One positive is that we are able to start working on field clean-up much earlier this year.  We have managed to pull in our winter squash harvest and our planning for 2019 is already ahead of schedule.  We passed our organic inspection with flying colors yet again and we are fully aware that we have gotten some harvests this year simply because of some of the adjustments we have made to handle wetter weather.

Veg Variety of the Month

There are few crops that allow a grower to make in-season adjustments more than lettuce.   Our philopshy this year has been to "just keep planting" the lettuce - even when some of those plantings are doomed to fail.  One new variety that has shown some definite positives for warmer season production is Bergam's Green.  We're pleased that our High Mowing seed representative, Paul Betz sent this one along for us to evaluate.  Nice call, Paul, we like it. 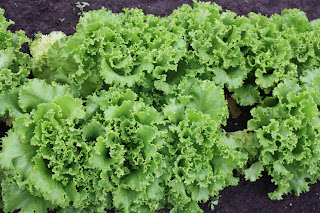 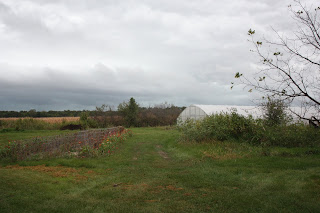 September kicked us off with five days of rain and it is leaving us with rain.  We have had two and a half days where the soil was NOT mud during this month.  To say that it has been difficult getting work done would be quite the understatement.

For those who are curious, the average rainfall for Tripoli in September is 3.11 inches.  According to KWWL Waterloo set a record for most rainfall in ANY month this year during September.  Our rainfall actually exceeded the rainfall recorded in Waterloo.  We must be special!

The rain thus far on October 1 has put us well past the 45 inch mark for the year.  The record for a single year is 53+" in Waterloo.  We are hopeful that we will come no where near that mark this year!

Song of the Month
Switchfoot's Faust, Midas and Myself has long been a favorite tune of ours and we think it is appropriate at a time when we might be tempted to be dissatisfied with our life the way it is now.


Picture of the Month 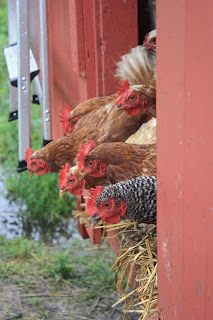 The hen flock has been stuck in the northwest pasture since the rains began because we just cannot risk getting the tractor stuck while trying to move their building.  Of course, every other location has been equally wet, so moving them wouldn't really do much for them.  The picture at left was taken just after their shelter door was opened for the day.  The hens were not terribly certain they wanted to get out of their dry building on this particular day.

What Happens When One Is Uninspired for a Newsletter?
Well, you get what you have a here.  We'll find reasons to write as the month progresses, not to worry. But, we'll give you a very short summary about farm happenings here: