Of Course It Did!

At some level, we were actually prepared for this to happen, believe it or not.  It was Sunday, October 14 and we knew it was supposed to be cool, windy and perhaps raining.  We were scheduled to go to Wabi Sabi farm for our Gang of Farmers gathering and we were prepared to do a little work in less than idea conditions.  We ended up working in the high tunnels and as we weeded, we heard a sound that didn't quite sound like raindrops on the plastic.

If I might be so bold, let me remind you of our April 25 blog post entitled Paths to Produce.  In that entry, we discussed the multiple snowfalls in April, including a final one on April 18.  The snow pattern was kind of odd considering how little we'd gotten in the prior 'Winter' months.  Let me reminder you all that we actually got over 2 inches of RAIN in one storm during January.  Snow in April wasn't completely unheard of, so we reminded everyone (including ourselves) that we shouldn't be getting upset.

If you actually took the link to the Paths to Produce post, you will notice that we were more concerned about how cool things were (and a relative lack of sunshine).  It had caused some issues with many early crops.  Of course, we got to the end of May and we were talking about the Heat Being On.  Our five inches of May rain all happened in the first week.  Spring, we hardly knew ye.

You've heard us talk about gnats in prior years, but conditions were perfect for them for a significant period of time this season.  They started in May and we fought them through July and into August (with a few additional appearances even later).  They were bad enough that we actually dedicated a post entirely to them.

We are used to periodic June storms.  But, once they started, it seemed they didn't want to stop.  Our total rainfall for June was right around 9 inches. An average June would see 5.35" of rain.  Nine is not entirely unusual, but it is wet enough to cause some issues.  And, it was enough to encourage more gnats.
July was actually a decent month for weather, with only three inches plus of rain.  The gnats were awful, but we were learning to deal with wearing various protective clothing despite the warmer temps.  Sadly, we had to deal with chemical spray issues again.  If I was wondering why we feel so beat down at the end of this season, I am beginning to understand it.  We finally get a month where the weather is relatively kind to us (setting aside the bugs) and our neighbors find a way to add a level of difficulty.

Things started to get absurd in mid-August.  In fact, we got another 8 and a half inches of rain that month, which was again well above the average amount.  It encouraged another hatch of gnats and delayed our potato harvest, which would have later consequences for us.  Why?

Well, because the Rain of Terror that was September started on.. well, September 1.  We considered building an ark, but we tried to be philosophical about it all.  It should stop sometime soon, we thought.... 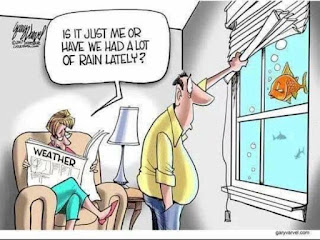 You all know what has happened since.  We were able to work in the fields only two days for the entire month of September and through the first week of October.  Of course, we DID do work in the fields, but it was only to get what harvest we could out of it in difficult conditions.  Hey, we got over 14 and a half inches of rain for the month.  That's quite a ways over on the right-hand tail of a bell curve folks! Simply put, it's been a tough, tough season.

Waterloo has set a record for the wettest Fall and Fall has done all of its bit yet.  Nothing like giving yourself plenty of clearance when you jump over the bar!

And so, it snowed on October 14 this year.  We've already had multiple nights under freezing, so when people ask if we'd had a frost yet I tend to laugh.  Sorry if I do that, I'm not laughing at you.  I'm just laughing because there is nothing else I CAN do.  It's ok, we're coming to grips with all of this and we'll make all the adjustments we can.
Speaking of adjustments, the Redwing Blackbirds were using the oak trees on the farm as a quick resting spot as they fly South.  So, while I was out taking pictures of the pretty snow, I tried to record their passing as well.  I thought I heard them telling me I should flap my arms really fast and maybe I could join them.

I think I'll pass.  I've heard the weather isn't necessarily better in the South anyway.  Besides, I want to throw some snowballs still.
Posted by Rob Faux at 5:49 PM

Email ThisBlogThis!Share to TwitterShare to FacebookShare to Pinterest
Labels: Tooning In, whether wythards