If you have ever farmed, you can appreciate the fact that exclamations are going to come out of your mouth in response to what is going on in the moment.  This is especially true if you are frustrated by whatever is happening.  I am not one to drop "swear words" very often, but every once in a while the words that are uttered make you stop and consider the situation for a second or two before moving on.  Perhaps one of the best examples I can think of is the nun who was a Social Worker in a county where Tammy worked some years ago.  Apparently, words that are not associated with a nun came out of her mouth.  If a nun says "damn it," you can't help but wonder if there is more impact than if I were to say it!  In her defense, I just have to say that the field of Social Work can be incredibly frustrating - and so can farming.

You... You... TURKEY!
Growing up, I learned that you could call inanimate objects, animals and sometimes your siblings a 'turkey' if they got on your nerves.  It's a fairly safe thing to say and few people will be overly offended by it if it is overheard.  Drop a wrench for the second or third time and watch while it bounces into a place that's hard to reach that third time?  Well, call it a turkey. You get to express displeasure in a way that is 'family-friendly' that way!

But what happens when the thing that is getting on your nerves is... 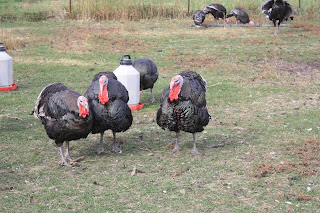 Yes, I was trying to finish loading the truck to get to a CSA distribution.  Yes, I was on time, but I didn't have much EXTRA time.  Yes, I heard interesting chirping noises coming from the area of the turkey pasture.  And, what did I find?  Most of the flock had managed a break-out through the fence.

I hustled out to try to get the birds back into their pasture and most of them complied with minimal fuss.  Except for one bird that wanted to make life more interesting.  After the third time that it managed to go in entirely the WRONG direction I found myself forcefully saying,

Not All Birds are Turkeys
I'll admit that this was not the first time that I've called a turkey a "turkey" with the intent of expressing displeasure and finding that the turkeys are pretty much immune to that particular insult.  But, normally, I find myself being much more judicious with my exclamations after this sort of thing happens.  The conversation goes something like this:

Analytical Me: "Ok, you just called a turkey a turkey.  Good for you.  If you are really getting so upset as to believe it will do any good to do that, you should back off a second and figure out a better way to do what you are trying to do."

Not So Analytical Me: "Stupid bird!  Of course it has to be a turkey so my yelling turkey at it doesn't make a difference!  Grrrrrr!  I need to go drop a wrench or something!"

I finally got the last turkey in and got the CSA distribution done.  The next day, I was feeding and watering the broiler chickens.  Usually, I don't let the birds out of their building before I give them their food and water.  When I do let them out too soon, they are underfoot and they make the task just that much harder.  So, of course, on this day, I let them out FIRST.  Ooops.

Now I had to watch every step I took and had to push birds out of the way so I could set the food bucket down.  As I did so, one bird acted like it wanted to take me on.  Chickens have a hard time with perspective.  You LOOK smaller when you are further away, so they figure they might be able to beat you in a fight.  But, as you approach, you keep getting bigger, which results in their decision to high-tail it away from you.  As I looked down at this particular bird and it looked up at me, I saw the tiny hamster-wheel in its head spinning.  The conclusion it made was to turn around and run away from me.  It was a good choice, but before I knew it, I was yelling, "CHICKEN!!!!"

Unlike the turkey, they didn't stop what they were doing and they really didn't pay much attention to me.  They were more interested in the food and water.  I was disappointed because I thought I was being inadvertently clever.  Yes, that's correct, I wasn't trying to be funny.  I wasn't even thinking about it, it just came out.  Once again, the target audience found my commentary to be accurate while failing to inspire or dissuade them in any way.

Analytical Me: "You need to stop letting the weather and the farm getting under your skin so much.  One of these times, you're going to let something slip that will have actual consequences."

Not So Analytical Me: "Yelling 'chicken' at a wrench doesn't make sense."

These Things Come in Threes
The third time, of course, was the charm.  This time, it was a (largely) inanimate object that incurred my wrath.  You see, the hen room needed to be scooped out.  The process pretty much consists of using a pitchfork and a shovel to take loads out to the bucket of the tractor.  Once the tractor bucket is full, you take it to the compost pile.
Unfortunately for us, we don't have an opening immediately next to the room to throw the 'used' bedding and poo into the bucket of the tractor.  Instead, we have to walk each 'load' on the pitchfork (or shovel) through a door and then an opening before we can toss it into the bucket.

I had a nice big load on the fork and I made it successfully through the door of the hen room.  I only had a few more steps to go and the load slipped off the fork and onto the floor.

The intelligent words that escaped my mouth at that moment?  "Oh, shit!"

Email ThisBlogThis!Share to TwitterShare to FacebookShare to Pinterest
Labels: general strangeness and minions, Poultry in Motion