Some of you may have noticed that we failed to put out an August newsletter in a timely fashion.  So, here is a fake newsletter to make up for it.  Well, actually, it's just a few pictures that represent some goings on at our farm that we thought we'd share.  That qualifies as a newsletter doesn't it?  It doesn't?

Well, we're going to do it anyway.  So there!

Mini-Poof at the Farm (again)
It feels like we've had more wind gusts that have caused us issues this year than we have most years.  That is not to say that we have had more severe weather than usual.  It's more the fact that we've had more visible consequences this year than we usually do.
The latest burst hit the farm sometime between 2 am and 4 am this morning (Aug 18).  Tammy woke up to raindrops hitting her face.

Yes, she woke up because rain was being driven through our open window, across the room and into her face.  This is good because we had a few windows open that needed closing.  But, this was not the gust in question.  That came just after she got the windows closed.  Let's just say that the whole house shuddered when this one hit.  We do get winds that make the house move about a half dozen times per year, so it isn't a completely new experience.

In any event, the little sweet corn patch we planted for ourselves is completely down.  That's just a reminder of one of the reasons why we don't put much effort into growing sweet corn.  A section of our maturing broccoli got rolled over.  They should be ok with a couple of exceptions.  And, a chicken building got moved a bit.

The last item was the most concerning since we had just gotten our youngest batch of broiler chickens out to their portable building.  These buildings are meant to move, but they are usually moved with Rosie the tractor during the day when Rob and Tammy are around to herd the birds out of the way so it can be safely moved.  The good news is that there does not appear to be any real damage to the building and the birds seem to be fine.  Now, with 150 little birds that like to stay next to each other, you can't be completely certain - so we'll keep our eyes open for problems the next couple of days.

In the end, the damage is light and we can handle it.

Horizontal Surface = Good Place to Nap
Our two Outdoor Farm Supervisors have been working extra-hard lately, which means they have been getting into some serious napping!
Just this morning, Tammy used the lawn tractor for a few minutes to help with some of the AM chores.  She parked it with the intention of coming back to it so she could do more.  The picture above is what she found.

Keep in mind that the period of time between parking and returning was probably not much more than 15 minutes.  And we still don't know how Soup would think that mower deck is a comfortable place to nap.
Inspector followed Rob into the granary while he went to load up some feed for one of the flocks on the farm.  He requested attention and Rob gave it to him in the form of a good, solid skritching.  After taking food to birds, Rob came back and found Inspector sleeping on the feed bin (seen above).  Apparently, that skritching wore Inspector out.  The sad thing?  Rob was not allowed to take a nap as well.

Anxious to Get It Running
And so, you have this big, beautiful solar array sitting on your property.  It took years of planning and then weeks of scrambling to do what it took to get it there.  It is collecting the sun, but that energy is going no where.  Why? 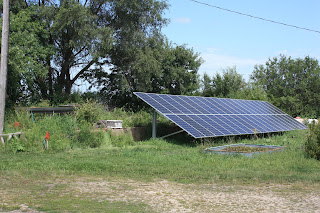 Well, it is all part of the process.  Alliant still needs to install the two-way meter and hook this system into the grid.  They have a period of time during which this is supposed to happen, so we are trying to be patient.  But, shucks, we have some very sunny days and we really would like to use some renewable energy on the farm!

We'll keep everyone posted as things progress.
Posted by Rob Faux at 2:19 PM