We realize the blog has been silent for much longer than it usually is.  The reasons are the usual and the not so usual, so we will dispense with them for now and get to some Genuine Faux Farm stuff for those who might like a dose of it!

New Used Chicken Buildings
Our good friend known as the super-hero Bandsaw Man made a couple of very nice poultry buildings that can be pulled on skids to move birds to different pastures.  He was no longer using them and he offered them to us this season.  All I can say is, "How did we do the poultry without these buildings?"

At present, we have both buildings occupied by broiler chickens.  The 'boyus' are still a few weeks from their trip to "the Park" and the 'nuggets' just went into their own building today!  We try to move these buildings every other day so the birds have some clean area to rest in AND the pasture has half a chance to recover.  We've found that moving the building the first couple of times is a bit of a circus with the birds, but they get used to the routine very quickly.  We are grateful that we have Rosie, the tractor, to help us move these buildings as they are a bit big to move without the mechanical help.

In answer to the question, "how did we do poultry without them," we had smaller buildings that we moved by hand.  We've had just enough near catastrophes with those over the past couple of years that it is nice to make this upgrade.  If you can't quite figure out what sort of catastrophe could happen with the smaller buildings, consider this:

Last fall was VERY WET.  We still had to move the buildings.  We moved the buildings by manually picking them up and moving them.  Grass gets very slippery when combined with poo and rain.  'Nuff said. 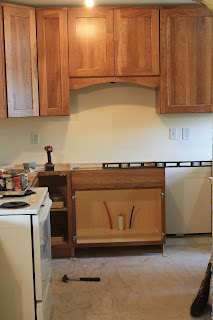 Since this picture, the counter has been put in, as has the sink.  The dishwasher is in place.  We can actually walk into the kitchen and wash out a dish or glass we have just used.  It's a strange, strange and wonderful feeling.  Is this how the civilized world lives?  Is it ok if we stay here?

Could You Try to Describe That Again?
I (Rob) have the distinction of having training in Computer Science, experience in raising vegetables and some knowledge in various other things.  In my opinion, computing professionals come in second to doctors when it comes to people asking questions of you once they find out what you do for a living.  Let me clarify - if you are introduced as a doctor, people are immediately tempted to ask about that twinge in their shoulder.  If you are a computing professional, it's a question about their email (or some such thing).

Before I get to it, let me say that I AM perfectly willing to answer questions as I am able and I am willing to hear about what you are growing - so don't let things I say here make you feel like I resent being asked.

It's a bit different now since I am a farmer.  I tend to get one of two things.  It is either:
1. A rundown of what someone is growing or has grown or their grandparents grow/grew and how good/bad it is/was.  And, of course, I get to deal with their 'surprise' when they find out the three tomato plants they grow in town in a raised bed are producing tomatoes now and my 500 plants have not really started yet.

2. A description of a bug, weed or plant condition that they would like my opinion on.  This is not so unlike what I often dealt with as a Computer Scientist.

But, often, the description comes out something like this (from a bird watcher's perspective): 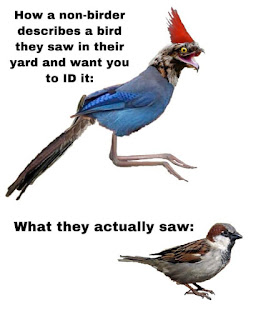 In reality, I recognize it isn't just the describer's problem.  It is also my problem because I need to take the time to ask leading questions that might bring us to a reasonably good answer.  I hope I do a decent job of that.  Even so - every professional who is in the position of trying to give a professional response based on on a layman's description can appreciate the sentiment behind that graphic.  It's not just a doctor, computer scientist, farmer, birder issue. 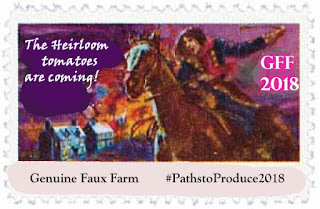 Yes, yes I did.  Our tomatoes did go in the ground about four weeks late this year due to field conditions, etc.  Even our high tunnel tomatoes went in late because we were trying to extend some other things in them because... field conditions were still too wet for those things too.  Even so, we have green tomatoes on plants and a few of them are starting to ripen, giving us some tastes that are now on our radar for 2019!  (Ignore the 2018 date on the graphic - those tomatoes would be REALLY late).

Ain't That Grand?
If you've read the blog, you might recall that I am also a postal historian.  As a postal historian, I have worked for many years putting together an exhibit on materials from the 1860's that has been shown competitively about once a year for many years.  That exhibit has done well enough, receiving 'gold' and 'large gold' awards most recently.  For those who don't quite understand award levels, every exhibit is given a 'medal level' with gold and large gold being the highest levels.  But, many exhibits receive these awards.  Of those that receive large gold, one is given the 'Reserve Grand,' which is essentially second place and another is given the 'Grand' (first place).


It is nice to have some affirmation that the work I have produced over a long period of time is well received.
Posted by Rob Faux at 7:48 PM