I was able to observe the turkeys last year and found them to be a bit less vocal and Pretty Lady told me I would get to see them a bit closer this year.  I think that will be ok, but I am learning that you don't really know someone until you live with them for a while. 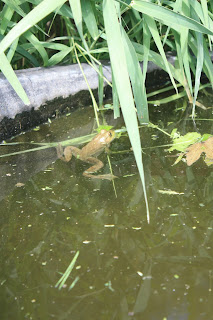 Once we got past June, things on the farm have gotten much dryer.  I realize the farmers are happy about it, but I don't wind the wet so much.  Still, I have to agree with them - the last year through early Summer was too wet for our farm.  Some of my tree friends failed to survive the Winter and the Fuzzy Guy was saying he thought it was because they were in some the areas that didn't dry out.  It was hard for me to watch while the farmer took out the remains of one of the 'Bristle Brothers,'  but it wasn't pleasant looking that spruce's remains every day either.

On the other hand, the wet weather has encouraged an increase in the number of frogs we have had this year.  I've had more tree frogs hanging around in my branches than I ever remember.  I admit that they tickle a little bit, but generally I like having them around.

Most of the frogs aren't looking for much attention, but we have a couple that are looking for notoriety.  Russell, the Cucumber Frog, has been in the cucumber patch most of the Summer.  Unlike past cucumber frogs, Russell doesn't like to jump out at the farmer much.  Instead, he'll just move a bit out of the way and observe as the farmer harvests.  Bob, on the other hand, likes to hang out in the tub that catches the water from the veggie cleaning station.  It seems like all he does is float around in the water, though I heard him singing the other day.

It is my understanding that the 'henlets' are on the other side of the Poultry Pavillion right now.


Pretty Lady told me they were going to move the young chickens into the flock with the older chickens soon.  The next day is always quite an event. 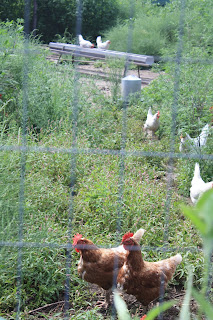 You see, the hens are neighbors, of a sort.  They reside in the Poultry Pavillion at night and they come out to their pasture during the day.  Their pasture is not too far away from my location, but they ARE far enough away that I don't have to be bothered by their chatter most of the time.

But, the day after moving day?

Ya.  Same words, just directed and with extra emphasis so it can be heard everywhere on the farm.


The farmers added a new bee hive to the farm this year (yes, we've had honey bees here before) and these have been very pleasant neighbors.  I especially like it when they come by and hum a tune for me. 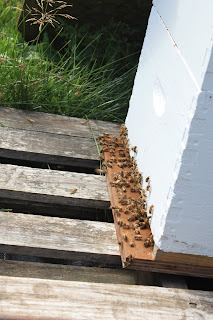 Lately, I have been most entertained by the new hatching of dragonflies!  The wetter year has provided a bit more support for them and the Fuzzy Guy with the Red Top told me this is the largest population of dragonflies he has seen since he got here.  I can just sit here and watch them hover, dive and spin.  Some of them have favorite places to land in my branches.  They will often use them as a sort of 'jumping off' point to go grab some insect as a snack.  Then they come back and chew a bit.  Happily, most dragonflies know to chew with their mouth closed so we don't have to have discussions about manners.