I have to admit that I am not terribly sad to see the snow melting at the farm right now - even though it means we enter the first "mud season" of the year.  In fact, the beautiful weather this past weekend (and likely until mid-week) has given us a bit of a boost that both of us really needed.

I've always kind of joked that I am "solar-powered," typically doing better on sunny days to get things done than on cloudy days.  That may not be as true during the hottest months of the year, but it sure seems to be true when the days are shorter.  Speaking of that, have you noticed that the sun is rising and setting closer to true East and West than it has been for some time.  In Iowa, that usually means you have to adjust your eyes as you drive East in the morning or West around sunset.  So, that can be an inconvenience, but I'll take the promise of longer hours of light that it brings and run with it.

We took the time this weekend to check out our bee hives (three of them) and can honestly say this is probably the first time we have been able to do that since it got really cold.  If you'll recall, the bees appeared to have a pretty good year on the farm. 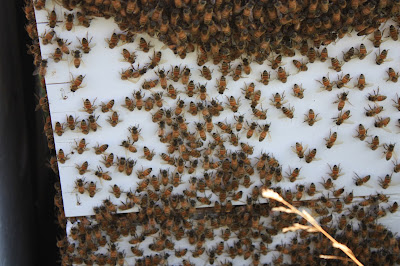 Sadly, they had a pretty bad Winter.  Each of our hives is what they call a "dead out."  There were no live bees in any of the hives, but there was a fair bit of honeycomb and honey in two of the hives.  Ah well, these things happen and we'll learn for next time.

So, part of the process on Sunday once we discovered the hives had no live bees was to pull out the frames that had honey and get them into a freezer so we could go through the process of saving the honey.  You see, with no live bees and warming temperatures, that honey was going to attract some problem critters, so we needed to deal with it.

Fortunately, we have multiple freezers on the farm, so we have options.

Actually, the timing of all of this couldn't be much better.  You see, we had emptied two of our freezers and unplugged them a couple of months ago.  It was so cold that we didn't worry about those freezers all that much.  But, now, suddenly, we needed one of the freezers to put the frames with honeycomb into.

I went to check the freezers and found that they were just beginning to defrost.  Wait too much longer and things were going to get a little ugly - phew!  Glad we took care of it today.

Actually, I had cleaning the freezers on my 'to do' list for the coming week.  But, it's just as well we got it today because it is easier to just take the chunks of ice and toss them out than it is to mop up the water in the bottom of a chest freezer.

And, last year at this time, we were still in the process of turning the house into something that looked a bit more like the owners actually cared.  One year later, we're still happy when someone says the house looks good.  And, one year later, we still have some finishing touches to do on the outside of the house.

Hey!  It's a house.  It requires maintenance.  At least we don't have scaffolding standing next to it right now. 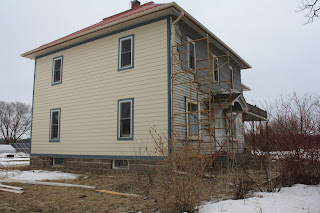 And now I remind us all of what the farm looked like exactly TWO years ago.  Yeah.  That's the year the drifts by the north bush line got tall enough that I could stand on them and see OVER the high tunnel.  That's a good bit of snow. 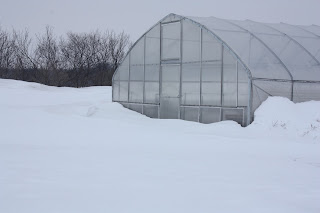 I put that there as a reminder that March is actually still at least partly the purview of Old Man Winter.  Before we get too excited that Spring has sprung, we'd better give ourselves a little reality check before the temperatures fall back to the averages in about a week.

Still, that doesn't mean we can't take this nice little shot in the arm and use the burst of energy that seems to have come from it!

We both heard our first Killdeer on the farm yesterday (Sunday) and I heard and saw one of our Cardinal friends out by the barn.  We drove down to Sweet Marsh and watched/heard some Sandhill Cranes fly overhead. And, yes, the Canada Geese had to honk at us too.

The bitter cold streak we had was pretty hard on the wildlife.  It was about two-thirds of the way through that bitter cold that I noticed a little sparrow sitting on the snow near the corner of the granary.  I expect it to fly away as I approached, but it did not.  That's when I realized that it was no longer living - frozen in a repose that it would not rise from.

I knew the cold was breaking when the Sparrows and Juncos started exhibiting more energy.  The Chickadees started calling more often and the Horned Larks suddenly disappeared from our landscape, just a day before we heard the Killdeer's song.

Right now, I just don't see what the Horned Larks can possibly like about the weather they chase back northward.  But, they have my respect.  It takes a special little bird to find subsistence and comfort in the frozen places of the world.

And now, if you don't mind, I am going to go BACK outside.  It isn't terribly breezy and there's sunshine out there.  And maybe, just maybe, I'll hear a Robin sing and tell me it's been a good day.