The following are pictures that were taken primarily in September.  We intended to post them at that time.  I only missed by a day....

Ok. Ok.  They were taken around September 6.   Remember, you can click on a picture to see a larger version.

Below is a picture of our southwest plot, looking towards the high tunnel and granary.  In the foreground are our late planting of green beans.  They produced in time for everyone to get one last blast of green beans before the expected frost the Saturday.  Now, that's timing! 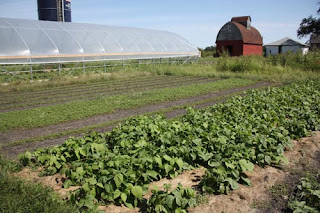 The turkeys were given a new home in the 'Poultry Palace' and a new pasture this summer.  We're now working on fencing in a second paddock to rotate the fields a little bit. 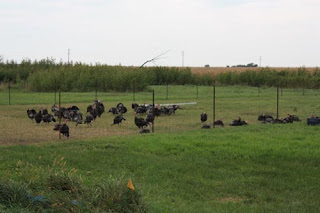 It has been a year where we've had to mow....alot.  When life makes you cut the lawn, use mulch.  This is some of our late plantings of lettuce, broccoli, kohlrabi, etc from about Sep 8.  And, yes, it does take a while to spread that much mulch. 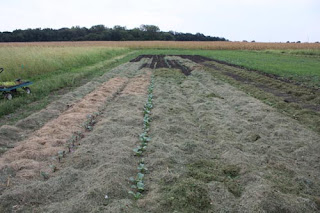 The above plot was originally supposed to be melons and watermelons.  But, by now, those who read the blog know we couldn't get into the field in time to put them in.  So, we made some adjustments.  The field that was originally to be sweet corn and pumpkins became....

Dry beans and summer squash/zucchini.  ssq/zukes are on the left.  This was planting #4 of summer squash and zucchini.  CSA members, Waverly Child Care and Bartels Retirement Center all got to partake of the fruits from those plants!  This is a good thing. 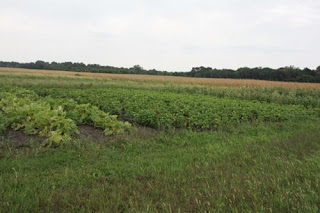 Back to the brassicae.  We just keep plugging along getting things weeded and mulched out there.  Here's hoping they produce.  So far, we can say we will get kale, pok choi, lettuce and kohlrabi from this field.  Still not sure about other things.  But, we'll keep working on it. 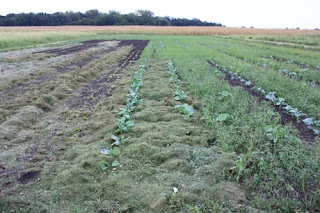