As consumers of food, we are all a bit guilty of judging the proverbial book by the cover.  And, granted, some of it is justified - because we should inspect our food before we eat it.  But, we make judgements based on how something we intend to eat LOOKS versus how it TASTES and how NUTRITIOUS it is.  We're selling ourselves short here.  It is my understanding that most of us have more than the sense of sight.  I've also been led to believe that people know how to think.  And yet, many still think tomatoes have to be round and red (and apparently a little waxy looking).

Case in point is the six-fingered carrot shown below.  First of all, it is a variety called Yellowstone, so it is supposed to be yellow instead of orange.  Second, it doesn't look quite like the picture-perfect carrots we see in the grocery.  On the other hand (hahahaha...uh... ok, not so funny), is there anything wrong with this carrot?  There were no signs of rot or damage.  The carrot was firm and smelled like...um... a carrot.  When we broke off a 'finger' it snapped cleanly and didn't show a pithy core.  The only issue with this carrot?  It might be a bit hard to clean between its fingers.

On another front, there was a Facebook meme that was shared with me a while back.  I usually take these things with a grain of salt (or three) because it is too easy to throw these things around without verifying facts or considering who it might offend.

However, the sentiment does ring true with how we feel.  GFF is certified organic.  To get that, we create a portfolio that is reviewed by the certifying agency.  It is reviewed and critiqued.  Our farm is inspected.  We pay money for the certification process and to pay the inspector.  Assuming we pass (and we have every year so far), we can tell you that our produce is certified organic.

If I opted to drop organic practices, I could stop spending hours on the certification process, have no one inspect my farm, get rid of an expense AND I wouldn't have to tell you a thing about what I sprayed on my crops.  I wouldn't have to divulge the use of GMO seed either.  This is a little simplistic because there are food safety laws I have to abide by regardless of whether I certify organic or not.  And, of course, there is no way we wouldn't answer your questions honestly and directly.  But, this isn't exactly about us.  It's about the way things are done.  Labeling should not be the purview of only certified organic growers.  It should apply to all growers. 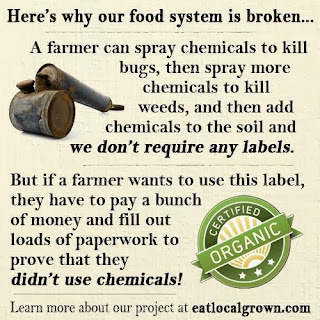 On the lighter side!  (about time, they all said).

We received a great picture that shows one of our bags (certified organic, mind you) traveling to the Daniel Boone National Forest.  This is a great idea!  Take your GFF bag with you on a trip and snap a photo of it in a different location.  Let's see where we can go with this!  What?  You don't have a GFF bag?  Well, we've got them.  Let us know you want one ($5).


And, CSA recruiting season is upon us.  For those who were with us in prior seasons, you know we warn you about certain snack sized tomatoes.  They taste great, but have a tendency to decorate one's shirt if you're not careful.  The Wapsipinicon Peach tomato is one of the biggest culprits.  Join us for 2014 and get your share of delicious GFF snack tomatoes.


And, from the "it must be Winter" files.  We rely on our clothesline to dry most of our clothing for as much as the year as we are able.  Let's just say we haven't seen this sight for a while now.  Even in Winter, life on the farm works with (and around) the weather.

We hope you enjoyed this post and stay warm this January!
Posted by Rob Faux at 5:30 AM