At the End of the Day

At the end of the day, the sun goes down.  And sometimes it paints a picture for us to enjoy.

Sometimes, it sneaks its way to the horizon behind a wall of clouds, letting a few rays of light make the announcement that the sun has done its job for this trip and that's all it has for us.

Then there are days where there are no clouds at all and the sun blazes its way through the evening hours until it looks like it might melt the ground or boil the ocean. 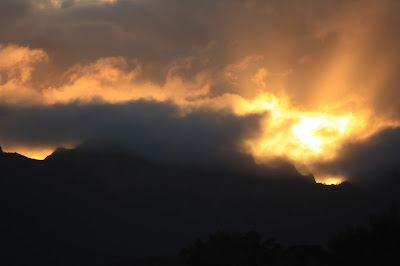 The end of a mid-January day in Duluth finds the sun diving for the shelter of the edge of the earth so it can hide its embarrassment that it did such a poor job warming the landscape this time around.

A day spent in the woods resulted in the sun playing hide and seek between the tree limbs until it finally found that sweet spot above the horizon but below the canopy so it could bathe the trail in light for a few short minutes.

But, on this day, the sun danced over the mountains and teased the clouds.  Its beams of light found ways to sneak back out to play even after the sun had finally gone to bed.  And, you could hear it chuckling in a self-satisfied way as it slowly pulled the sunbeams back into itself.

And it finally sank into the West.