It is possible that this gate held a position of prominence on our farm during the days when there were more pigs than chickens on the property and the Faux's were somewhere other than what is now the Genuine Faux Farm.  Today, this gate post holds up one side of the gate and a tree holds up the other.  The tree, being the obstinate sort, has decided it wants to be where it is and it will slowly swallow up the gate by growing around it.  It is possible that Tammy and I had a chance to remove the gate during the first couple of years during our residence at GFF, but there were so many other things on our 'to do' lists that this task barely made it onto our radars. 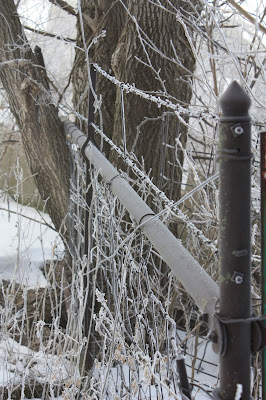 I usually don't take notice of the gate at all during the growing season.  Leaves and grasses hide it mostly from my vision and it really doesn't lead to anywhere that we want to go.  Instead, it waits until the late Fall and Winter months to remind me of its presence.  The leaves are gone and the grasses and other plants have died back and I start considering whether or not this area is due to be 'cleaned up' this year or not.  The answer, thus far, has been 'not now.'  It is possible that the answer for us might even be 'not ever.'

Then we got a nice frosty day and I found myself meandering around looking for some good pictures.  During the "frosty time of year," there is more time to indulge in a little artistic creativity.   And, if I am feeling like I'd like to discover some new angle in photography, I go back and revisit areas that have fallen into the 'not now' and perhaps 'not ever' categories.  Why?  Because, it is the places I don't frequent as often on the farm that I might find insights that wouldn't announce themselves to me otherwise.

In this case, the insight is merely a confirmation of something I think I've believed for some time now.  Not every part of a working farm needs to be 'cleaned up' and not every gate has to 'go somewhere.'  As humans, we have a tendency to believe that everything has to work for us and that it is a sin to not take advantage of every resource.  While I do not believe in being wasteful, I also am not so full of myself to believe that the needs of the humans on the farm are, by necessity, larger than other beings that make the farm their home.  Sometimes it is the 'messy' areas that become the most useful by providing that location where the frogs and toads can hibernate or the the ground nesting bees can manage their colony with minimal disturbance.

Does this gate do anything in particular to provide habitat?  Oddly enough, it does.  The gate will not open the way it is.  Which means the humans don't go behind it without significant effort.  The farmers put up fences to exclude varmints from getting at the chickens or the broccoli.  Well, here is a case where a fence is being used to keep the varmint farmers out.  In a weird way, I actually find that refreshing.

This post was initially shared in January of 2019.  I made a few small updates and a couple of word choice edits - otherwise, I really, REALLY like this post.

Why?  Because it reminds me that the 'wild' places on my farm have a purpose and that every purpose does not have to serve me.

The gate, the tree and the post are all still where I last left them.  The farmers still do not go past that gate - and that's the way it probably should be.

The Secret Life of a Farmer

The gate is open right now, even though it is normally latched.  You see, the farmers typically keep that gate shut, just in case things sho... 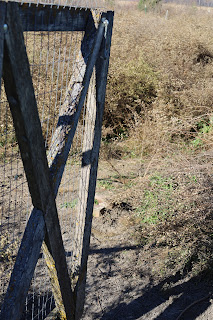