Welcome to the July 4th edition of Postal History Sunday on the Genuine Faux Farm blog!  If you've just walked into the door to view this blog for the first time, please feel welcome and if you have been here before, please be patient while I remind everyone to take a moment to get comfortable and grab a favorite beverage - but keep it away from the paper items (and the keyboard)!

As for those worries that bog you down during the week, now is the time to imagine that they are tied to the fireworks and let them go screaming into the sky, only to explode into a sparkly rainbow of color.  Let's see if we can learn something new today!

This week we're going to look at an item that is much newer than many of the things I tend to show here.  This letter was mailed by Otto Becker in Chicago on June 24, 1947.  He addressed the letter to the Spencer Fireworks in Polk, Iowa, placing a 16 cent stamp to pay for the standard letter rate (3 cents) and the special delivery charge (13 cents).

The three cent per ounce letter rate for mail inside the United States was effective on July 6, 1932 and remained in force until July 31, 1958.  Twenty-six years probably seems like a pretty long time for a single rate to be effective.  For contrast, these rates changed eleven times from 1974 to 1999 (26 years) where the postage rate started at 8 cents at the beginning of 1974 and was 33 cents by the end of 1999.

At the time this letter was sent, postal customers could opt for Airmail letter service, which would have cost 5 cents per ounce.  Such a letter would have required some sort of marking that airmail was requested.  This letter does not use air service, so postal historians like to call it "surface mail," which covers travel by boat, train, car, truck or alpaca.  Ok, maybe not alpaca.  But, I think you get the idea.

The Special Delivery service cost an additional 13 cents (Nov 1, 1944 - Dec 31, 1948).  Payment of the additional postage meant that once the receiving post office got the letter, they would send it out for delivery - even if the postal carriers had already left to run their routes!  This service was available in the United States starting in 1885 and was terminated in 1997.  At present, any mail received at a destination post office after the mail distribution will simply wait until the next day's distribution.


Otto Becker probably wanted to do business with the Spencer Fire Works company located in Polk, Ohio.  You would think that someone who lives in Chicago would have some idea as to the difference between Ohio and Iowa.  Yes, yes, I know.... They both have a lot of vowels.  With two of the three letters in common, you *might* be able to suggest that they were having trouble with a vowel movement.

In any event, a helpful postmaster found that there was a Polk CITY in Iowa, so they added "City" to the address and away it went, leaving Chicago and arriving in Polk City the next day (June 25).

The Polk City postmaster probably rolled eyes to the sky and said, "we've got another one."

I'm guessing this wasn't the first (or last) time that something was incorrectly addressed to the Spencer Fire Works company and sent on to Polk City, Iowa, by mistake.

The postmaster dutifully re-mailed the item to Polk, Ohio and a backstamp on the envelope shows that it did arrive at the proper town in Ohio on June 28.

Items like this are a bit more interesting to a postal historian, such as myself, because something didn't quite go according to plan in the delivery process of this letter.  I will also admit that the connection to my home state (Iowa) also makes it more attractive to me.  If this letter had been correctly addressed to Polk, Ohio, I highly doubt I would have given this item a second glance!

Initially, I thought it was interesting that someone would try to send something to a fireworks company in Iowa of all places.  After all, there had been a ban on the private sale and use of fireworks in this state since 1938 (and has only been recently lifted - see below).  By 1947 (the time this letter was mailed), I suspect most people in surrounding states might have some idea that fireworks were illegal in this state.  One could say that it is ironic that people are confusing one state with legal fireworks with another state with no fireworks allowed.

But, that's not good enough.  I like a full dose of irony when I can get it.  And, I got it this time.

In the process of confirming the date that the ban was put in place, I was able to learn some information about a key event that had much to do with the fireworks ban in the state.  Before I tell you about it - look again at the NAME of the fireworks company.  Got it stuck in your brain now?  Good.

The year was 1931 and a very dry weather was beginning to take hold of a significant portion of North America.  Have you heard of the Dust Bowl?  Well, there you are.  In any event, things were dry in Iowa, but towns in the state were still intent on celebrating the Fourth of July with fireworks.  On June 27, 1931 temps were in the mid to high nineties and winds were strong.  I think you know what comes next...

There was an accident in one town.  A local retailer had a display of fireworks that was accidentally set off.  Fires spread rapidly.  By the time they died down, one hundred buildings in the center of town were destroyed.  Amazingly, no one died in the fires.

The name of the town that burned due to a fireworks accident? 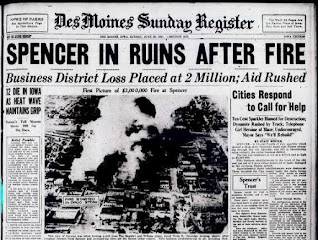 And A Bit More of the Story
One major event wasn't quite enough evidently to spur the ban.  The "Remsen Holocost" of 1936 simply provided more impetus for change.  Legislative action in 1937 led to the ban taking effect January 1st of 1938.  This ban existed up until its removal in 2017.

The presence of large retail outlets at the border attested to a long-standing tendency of Iowans to cross the border to purchase fireworks regardless of the ban.  As recently at 2013 there were more than 25 fires started by personal fireworks in the state.


Sadly, some of the side effects of ban removal were felt in the first year.  Among them was an amazing decline in air quality in the state during the primary fireworks use dates.  Interestingly enough, one of the reactions has been for local communities to ban the use of fireworks within town limits.

Now, in 2021, we're looking at very dry conditions for most of the state.  It's not Dust Bowl dry, but it is enough that we should all exercise caution with fire.  Here's hoping we have safe celebrations for our independence.

I hope you enjoyed today's installment of Postal History Sunday!  Thank you for joining me and letting me share some things that interest me each week.  Have a good remainder of the weekend and a splendid week to come!

You can start sounding like an expert when it comes to United States domestic postal rates if you know what resources to use.  An excellent work by Henry W Beecher and Anthony S Wawrukiewicz is titled "U.S. Domestic Postal Rates, 1872-1999."  I certainly do not memorize all of the dates and rates - especially when I am looking at items out of the 1860s.