Would You Walk On By?

We were exploring a walking/biking path that the "locals" often used for all of the things locals use such paths for.  At the furthest point in the loop, we came upon a pond that had gentle ripples in the water from a light breeze.  The sky, clouds and surrounding trees were reflected in its surface.  At that moment, there were no "human" noises that we could detect other than out own footsteps as we approached. 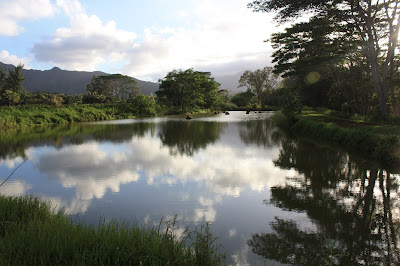 We had the camera along.  Well, of course we did, we were taking a hike on a new trail and we almost always bring the camera for such things.  And, I wanted to capture what we were seeing as best as I could - knowing I would likely fail in the effort.

And, this is the photo I like best of the ones I took at that moment in time.  It's a good picture.  I did manage to capture what I was seeing, and feeling, while I stood there.

When people see images like this one, they often comment that they would love to be there, just sitting and enjoying their surroundings.  It looks so peaceful.  It's so beautiful.  A person could relax there.

The answer is actually "yes" and "no."  This was a new trail to us so we were in explorer mode.  We weren't sure how far the trail was going to run and we did not know how long it would take.  So, there was a little pressure to keep moving.  On the other hand, this was a hike for enjoyment and no other purpose, so we were pretty relaxed.  And, we did take a few moments to appreciate this particular place.  But, not nearly as many moments as I would like to now - as I look at the photo again.

Yes.  We're pretty good at making ourselves legends in our own minds.  And, we know good things when we see them if they are in a picture or recording.  But, we aren't usually all that good at actually noticing that moment when the birds actually ARE singing.  We have a tough time convincing ourselves that we have the time or ability to help the family at the side of the road.  We hesitate and rarely follow through when we witness someone who is being rude and threatening.

And, we all too often fail to notice that we're actually standing in a beautiful picture.

Email ThisBlogThis!Share to TwitterShare to FacebookShare to Pinterest
Labels: dangerous pastime, I AM a protester